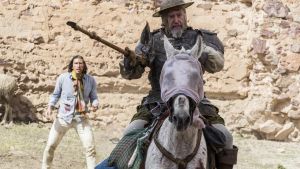 A year and a half ago, we assembled in Cannes to confirm that Terry Gilliam’s The Man Who Killed Don Quixote actually existed. Aware that the director had been through all classes of production hell, the audience fully expected the ceiling to fall in or a wild to bear to rip the front row into bloody shreds. None of that happened. Yes, it existed. Now, it has made it into commercial cinemas.

“Twenty-five years in the making and the unmaking ... ” a legend runs before the titles. Is it worth it? Well, “long-cherished projects” invariably disappoint. The kindest thing we can say is that, considering the bad luck that followed the film around, it’s a small miracle that The Man Who Killed Don Quixote is not irredeemably terrible. Indeed, a fair amount of it is pretty decent.

Adam Driver is believably fuddled as a compromised movie director who gains meaning while shooting a commercial in Spain. Jonathan Pryce, star of Gilliam’s masterpiece Brazil, is genuinely excellent as a version of a version of Don Quixote. He has the long face. He has the sad, cracked voice. He can wear cardboard armour with dignity. But the finished work feels compromised and patched together. Nothing that had such an unhappy history could feel otherwise.

If you’ve seen Lost in La Mancha, the great documentary on Gilliam’s attempt to shoot the film nearly 20 years ago, you will have some idea of the plot. Driver plays Toby, a cynical advertising man who, a decade earlier, shot a monochrome short based around Cervantes’s novel. After various fallings out with stereotypically corrupt financiers, he seeks out the original cast. His Sancho Panza is dead. His female lead (Joana Ribeiro) has fallen among exploiters in Madrid. His Quixote, a shoemaker, is still alive and now seems to think he really is that fanciful character. After more confusions, Toby finds himself fleeing across country as Sancho to the chivalrous Don.

Though Driver is the wrong shape, those scenes are strong enough to have us yearn for a version of the novel featuring these actors. Gilliam’s trademark wide-angle lenses give their journey a spooky otherness that admits us to their fantasy. But the script doesn’t seem interested in the double delusion at the concept’s centre: the shoemaker doesn’t exactly think himself a knight; he thinks himself a man who thinks himself a knight. (Do keep up.)

The longer it goes on the less interesting it seems. The final blowout in a medieval castle feels astonishingly unfinished for a project that’s been honed over a quarter of a century. Worse still for Gilliam is the hollowness of the female characters. The film actually begins with Toby jocularly groping a crewmember. It’s supposed to be funny. Awkward timing there, Terry.