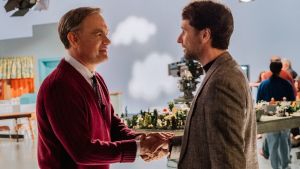 Film Title: A Beautiful Day in the Neighborhood

One music cue alone justifies the price of a ticket. After arresting scenes set in something like the real world, the soundtrack admits the lovely, tinkly sounds of Nick Drake’s Northern Sky and shifts to a toy version of New York in which wooden cars trundle gaily over darling bridges. If only Oliver Postgate were alive to see it.

The viewer could be forgiven for wondering what sort of film he or she was watching. Other uncertainties have damaged A Beautiful Day in the Neighborhood’s prospects with awards juries and with US audiences. The publicity has understandably hung around Tom Hanks’s gorgeous performance as the US children’s entertainer Fred Rogers.

A friendly face on PBS for more than three decades, Mr Rogers offered comfort from the age of the Byrds to that of the White Stripes. The nostalgic adults who made Won’t You Be My Neighbor?, Morgan Neville’s doc on Rogers, such a hit in the US no doubt expected Hanks to flesh out a formal biopic.

It is most assuredly not that. From a screenplay by Micah Fitzerman-Blue and Noah Harpster, A Beautiful Day in the Neighborhood details the uneasy relationship between Lloyd Vogel (Matthew Rhys), a cynical journalist, and the celebrity he has reluctantly agreed to profile. The film turns out to be Vogel’s story. No category fraud is involved in Hanks’s current Oscar nomination for best supporting actor. (Twenty-first century hacks will chortle first at Vogel being flown across the country for a 400-word snippet and then at the editor’s happy acquiescence when he files something 25 times that length.)

All this is a shame. Marielle Heller, the gifted director of Diary of a Teenage Girl and Can You Ever Forgive Me?, knows exactly what sort of film she is making. Originating in an article for Esquire by Tom Junod, A Beautiful Day in the Neighborhood is — we’ll allow one more of these — another film about an American man and his emotionally incompetent father. Chris Cooper deserves enormous praise as the drunken layabout who, after deserting his wife when she was terminally ill, has left his son at war with the world. Rhys begins by exercising his gift for cloudy introspection, before allowing a convincing softening of the edges.

The Welsh actor offers domestic audiences an effective proxy as we encounter an entertainer who, if dumped anywhere else on the globe, would struggle to flog these levels of ingenuousness (even our children’s entertainers are a bit more angular). A defining incident comes when, during an interview, Vogel leads off by suggesting it must be difficult to be so familiar to so many Americans. Rogers smiles warmly and thanks the journalist for his concern. The audience joins Lloyd in a vigorous roll of the eyes at the interviewee’s refusal to run with the comment and discuss the challenges of fame. Vogel wasn’t showing concern. He was prying.

Hanks’s subtle, occasionally creepy performance admits the possibility — a crease in the corner of the actor’s eye — that Rogers knows what he’s up to here. He is a skilled operator and cannot be wholly unaware of how his talent operates.

The opening semi-fantasy sequence in which Lloyd Vogel becomes a character in Rogers’s show admits a queasy quality to the entertainment. The film is not, however, reticent in acknowledging the affection in which Fred is held. One gorgeous scene finds the occupants of a subway car spotting Rogers and spontaneously singing the theme to his show. It’s a genuinely touching episode — speaking to the child within the adult — that contrasts markedly with the famously bogus tube train fiasco in Darkest Hour. This tribute feels plausible. It feels touching. But it also feels a bit otherworldly. All those adjectives are appropriate for another tremendous film from one of our era’s great young directors.

Elisabeth Moss: ‘I don’t care what it is as long as it’s good’
Real news has value SUBSCRIBE