Queen & Slim: Daniel Kaluuya and Jodie Turner-Smith save this film

Review: This ‘Bonnie and Clyde for the Black Lives Matter generation’ isn’t a total failure 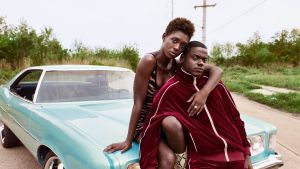 The dazzling, edgy, wholly convincing beginning of Melina Matsoukas’s debut feature offers frustrating glimpses of what might have been. Positively inviting the phrase “Bonnie and Clyde for the Black Lives Matter generation,” Queen & Slim never goes completely off the rails.

The gifted director of the video for Beyoncé’s Formation (and many others) invests every shot with a soupy energy. Daniel Kaluuya and newcomer Jodie Turner-Smith fire sparks off each other’s flesh.

But, after that opening section, we are left asking too many questions of the plot. By the close we’ve drifted into the realms of fantasy.

Queen (Turner-Smith) and Slim (Kaluuya) meet up in a mid-west diner for a Tinder date. On the way home, they are stopped by a racist police officer and, after various humiliations, end up half-accidentally shooting him dead. Matsoukas handles the scene with great discretion. The sickening inevitability takes nothing from the accumulating tension.

What happens next is a little too neat. We know there is no easy way out for the couple — who have just met, remember — but their immediate transformation into devil-may-care fugitives strains credulity. Lena Waithe’s screenplay needs to work harder at making that shift plausible. And what about that gun-shot wound in Queen’s leg? She wraps a bandage round it and it causes no further trouble than you’d expect from a stubbed toe.

Along the way, as their story gathers traction in the media, too many passers-by stand in for different corners of the argument. This middle-aged African-American regrets their outlaw celebrity. His son sees them as heroes. A white couple speak up for liberal tolerance. And so on.

Some of the stylistic flourishes are delightful. Others work too hard for their own good. The puzzling sequence that cuts from a riot to a sex scene would make more sense within one of Ms Matsoukas’s music videos. The juxtaposition has superficial aesthetic value, but it makes no lucid socio-political argument.

For all that, the two leads – both British, interestingly – have the skill and the charisma to maintain interest throughout. Sharp, cued-in and aware of structural biases, Queen emerges as the senior party in the developing relationship, while Slim, who has the sweetness common to many of Kaluuya’s characters, allows himself to be swept along in the awful rush.

They are just about good enough to excuse the epic absurdity of the closing scenes.