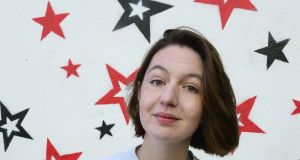 Sally Rooney: winner of Novel of the Year at the An Post Irish Book Awards. Photograph: Cyril Byrne

Rooney won the prestigious Novel of the Year award for her second book, Normal People, a love story with more than a touch of class, which Anne Enright in her Irish Times review called “superb”. It came out on top in a shortlist which included Man Booker Prize winner Milkman by Anna Burns and From a Low and Quiet Sea by Donal Ryan, with which it shared a Man Booker longlisting and a Costa Novel of the Year shortlsting. On Thursday, Rooney finds out whether she has also won the Waterstones Book of the Year award. Her novel is also to be adapted for BBC TV by Lenny Abrahamson.

Senator Lynn Ruane won Non-Fiction Book of the Year for People Like Me, which Irish Times reviewer Ivana Bacik called a “compelling memoir” about her circuitous journey from Tallaght to Trinity College and the Oireachtas.

The Importance of Being Aisling by Emer McLysaght and Sarah Breen was an obvious winner of Popular Fiction Book of the Year, after it repeated the phenomenal success of their debut, Oh My God, What A Complete Aisling. By contrast, few would have predicted the huge commercial success of The Cow Book by John Connell (about the author’s return to live on the family farm) and Notes to Self by Emilie Pine (a UCD academic’s deeply personal and honest essay collection), winners respectively of Popular Non-Fiction Book of the Year and Newcomer of the Year.

Maria Dickenson, awards chairperson, said: “This is a really outstanding line-up of winners. It demonstrates the absolute breadth of quality writing we have in Ireland, right across the genre spectrum. It is also great to see so many female writers winning accolades this year. Many of them, including Emilie Pine, Sarah Webb, Lynn Ruane, Cora Staunton and Sally Rooney, are all writing about what it means to be a modern woman in contemporary Ireland and it is striking that these authors used the art of writing to tell their stories in such a truthful and honest way.”

Poet Thomas Kinsella received the Bob Hughes Lifetime Achievement Award, while a special award was presented to the family of author Emma Hannigan, who died this year.

More than 100,000 votes were cast to select the winners, almost double last year’s tally. The public can vote for their overall An Post Book of the Year at irishbookawards

Highlights of the awards will be broadcast on RTÉ One at 10.15pm on Thursday, November 29th.

Irish Poem of the Year
Birthday by Brian Kirk

Short Story of the Year
How to Build a Space Rocket by Roisin O’Donnell (From The Broken Spiral ed. by RM Clarke)