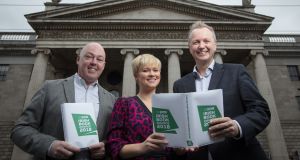 The GPO on Dublin’s O’Connell Street was famously the headquarters for the Easter Rising, a revolution led by poets and writers, so it was an appropriate location for this evening’s announcement of the An Post Irish Book Awards shortlists.

It is no surprise that Man Booker Prize winner Milkman by Anna Burns is shortlisted for novel of the year alongside the two longlisted Irish titles, From a Low and Quiet Sea by Donal Ryan and Normal People by Sally Rooney, along with A Ladder to the Sky by John Boyne, Travelling in a Strange Land by David Park and Future Popes of Ireland by newcomer Darragh Martin.

The Importance of Being Aisling by Emer McLysaght & Sarah Breen must be favourite for popular fiction book of the year, given its phenomenal success and the fact that their first book was shortlisted last year but did not win a prize. There will also be a lot of support for Letters to My Daughters, a huge bestseller when it was published posthumously after Emma Hannigan died last March. Graham Norton, whose debut Holding won in 2016, is back again with A Keeper, another No 1 bestseller although less well received by critics. Also shortlisted are Grace After Henry by Eithne Shortall; Our Secrets and Lies by Sinéad Moriarty; and Dancing with the Tsars by Ross O’Carroll-Kelly.

For a book of essays, Notes to Self by Emilie Pine has been a surprise bestseller and the subject of huge critical acclaim. It is shortlisted in two categories, nonfiction book of the year and newcomer of the year and must be a strong contender to win at least one, although both fields look very competitive.

People Like Me by Lynn Ruane; Michael O’Leary by Matt Cooper; Climate Justice by Mary Robinson; On The Edge by Diarmaid Ferriter; and A Reluctant Memoir by Robert Ballagh complete a heavyweight shortlist for nonfiction book of the year. Newcomer of the year is also an exciting list, with The Earlie King and the Kid in Yellow by Danny Denton; This Hostel Life by Melatu Uche Okorie (a debut coup for both author and publisher Skein Press); Promising Young Women by Caroline O’Donoghue, Mind on Fire by Arnold Thomas Fanning; and, appropriately for an An Post award,The Lost Letters of William Woolf by Helen Cullen. (Darragh Martin, however, is strangely absent.)

Skin Deep by Liz Nugent and The Ruin by Dervla McTiernan feature in both the crime fiction and Ryan Tubridy Show listeners’ choice award. Their thriller rivals are A House of Ghosts by WC Ryan; The Confession by Jo Spain; One Click by Andrea Mara; and Thirteen by Steve Cavanagh. Tubridy listeners have also voted for Ladder To The Sky by John Boyne; The Stolen Girls by Patricia Gibney; The President Is Missing by Bill Clinton And James Patterson; and The Woman In The Window by AJ Finn.

The traditionally male-dominated sports book of the year features two female double acts – Game Changer by Cora Staunton with Mary White and Driven by Rosemary Smith with Ann Ingle – as well as The Hurlers by Paul Rouse; At All Costs by Davy Fitzgerald with Vincent Hogan; Fighter by Andy Lee with Niall Kelly; and Sean Cavanagh: The Obsession by Sean Cavanagh with Damian Lalor.

The awards cover 16 categories, including children’s, cookery, sports, short story, poetry, teen and young adult and a new Irish language category. The shortlists are compiled by a panel of booksellers, librarians and critics. The public are now being asked to vote online at irishbookawards.irish/vote2018/. The winners, chosen by a combination of a literary academy and the public, will be announced at an awards ceremony hosted by Keelin Shanley in Dublin’s Clayton Hotel, on November 27th.

Maria Dickenson, the awards chairperson, said: “This year’s shortlist once again demonstrates the wonderful wealth of writing talent we have in Ireland. We know that the Irish literary culture is regarded as one of the greatest in the world and we’ve always wished for an awards project that rises to that challenge. We’re immensely proud of what we’ve achieved with the Irish Book Awards through a broad coalition of readers, publishers, writers, booksellers, librarians and media.

“We are also delighted to welcome An Post this year as the new headline sponsor. An Post is, we think, a marvellous fit for the awards because writing and spreading the word is their business, as it is ours. The Irish Book Awards have become a landmark event in the Irish bookselling calendar, supported by the entire industry, and, with An Post on board, we will bring the event to an exciting new level, celebrating the vibrancy of the Irish book business.”

David McRedmond, CEO at An Post, said: “Our message is simple: These are fantastic books. Buy them and send them to your friends. Enjoy them.”

WRITING.IE SHORT STORY OF THE YEAR
How to Build a Space Rocket by Roisin O’Donnell (from The Broken Spiral ed by RM Clarke)
Prime by Caoilinn Hughes (from Granta, March 2018)
The Mother by Deirdre Sullivan (The Dublin Review, December 2017)
Pollyfilla by Mia Gallagher (from Shift , New Island Books)
Gooseen by Nuala O’Connor (from Granta, June 2018)
The Woman Who Was Swallowed Up by the Floor and Who Met Lots of Other Women Down There Too by Cecelia Ahern (from Roar, Harper Collins)