Doug Morrissey tackles the Kelly legend from a socio-economic angle 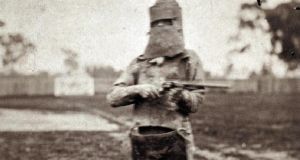 Australians like to view themselves as natural born rebels who are resistant to authority. It is part of the foundation myth the country tells itself, based on some of the population tracing their heritage to convicts transported from Britain and Ireland.

But mostly, the opposite is true. It is a hugely proscriptive and very law-abiding society. And with three levels of government – local, state and federal, each with its own set of rules and regulations – there are a lot of laws to abide to.

The one blind spot Australians have towards actual rather than imagined outlaw behaviour, is a veneration of Ned Kelly. The world’s first feature film, made in 1906, was The Story of the Kelly Gang. More books and songs have been written about Kelly than any other Australian figure, and most of these adhere to that famous quote from John Ford’s 1962 film The Man Who Shot Liberty Valance: “When the legend becomes fact, print the legend.”

Dr Doug Morrissey has done more than most to separate the fact and fiction of Kelly lore. His previous book, Ned Kelly: A Lawless Life, said the outlaw and his gang’s last stand in the Victorian town of Glenrowan, in 1880, was proof Kelly was a criminal, not a rebel. The gang took 60 hostages in a hotel and planned to derail a train carrying police to the scene. “[It] was an act of lawless terror designed to … slaughter its passengers. It had nothing to do with the fight for Irish Catholic political freedom either in ‘the old country’ or colonial Australia.”

Selectors, Squatters and Stock Thieves tackles the Kelly legend from another angle, being mainly about the socio-economic circumstances people found themselves in in northeast Victoria in the 19th century. Morrissey adds greatly to our understanding of the forces that shaped Kelly and, more importantly, those that probably did not, despite Kelly saying so.

The book is decades in the making, starting as Morrissey’s PhD thesis in the 1980s, “a time when the Kelly myth was not being questioned”, he writes. But having lived with the story for so long, Morrissey occasionally assumes a level of foreknowledge some readers will not have. The “selectors” part of the title is not properly explained until page 92, and “squatters” is never fully explained. The reader will gather from context what squatters were, but it would have been helpful to have it explained in simple terms at the beginning. The state library of Victoria’s website, for instance, has a succinct explanation of squatters being “settlers in the new colonies of Australia [who] could simply trek into the bush, mark out a large parcel of land and claim ownership without reference to anyone else”. Edward Micklethwaite Curr, who was both a squatter and author, wrote of his class that “No body of men ever created so much wealth in so short a time”.

Land reform and a concerted effort to spread this wealth led to the selector class: settlers who selected as good a plot of land as they could get, paying for half an allotment at a uniform price of £1 per acre and paying rent on the other half over seven years. Kelly’s mother Ellen and various relatives were selectors, and Ned Kelly himself applied for land (as shown in an original document unearthed by Morrissey) but never followed through.

The Whitty and Byrne families (originally from Wexford and Wicklow, respectively) are explored in great detail, not only through their dealings with Kelly, but also about their history and contribution to Australian society.

“There was more than a hint of jealousy and envy in Ned’s angry … words concerning Whitty and Byrne’s farming accomplishments. While Whitty and Byrne diligently and with sacrifice settled their large families on the land, Ned’s relatives squandered their opportunities.”

The book goes into great detail to explain Kelly’s complicated connection with police officers such as Alexander Fitzpatrick and Ernest Flood, who were in relationships with Ned’s sisters Annie and Kate. Kelly was friendly with Fitzpatrick and Flood, until it was expedient for him not to be. “Once Ned became an outlaw any memory of friendly relations with the police gave way to wild denunciations of tyrannical misconduct which, by the time of his execution, had become in his own mind a justification for his lawless life.”

The essence of who Ned Kelly really was is summed up in a quote from Bridget Kennedy, wife of Sgt Michael Kennedy, whom Kelly shot dead. “He murdered my Michael and robbed his body; there was no mercy, no respect, just cruelty. I lost the child I was carrying after Michael died and raised our children alone.”

Selectors, Squatters and Stock Thieves is an important and scholarly addition to the study of Ned Kelly and that period of Australian history.