It is time to take a sharp inhale, people. Sally Rooney’s Normal People is superb 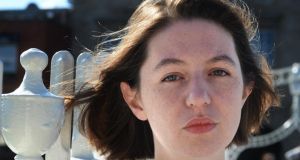 Lord be with the days when the job of the critic, especially the Irish critic, was to reassure everyone that a recently successful writer was no good, which is to say not as good as Proust. It is time to take a sharp inhale, people. After the success of Conversations With Friends, Sally Rooney has produced a second novel, Normal People which will be just as successful as it deserves to be: it is superb.

Marianne and Connell are schoolfriends-with-benefits living in Carricklea, Co Sligo. Connell’s mother is Marianne’s mother’s cleaner, but this social difference is masked by the fact that Connell is popular in school and Marianne, being odd, is a bit of a pariah. The story of the novel is the story of their relationship over the next several years, as they finish school and go to college, where Marianne is a social success and Connell merely tolerated by the Trinity types in Dublin.

It might be another Eugene Onegin, but actually that part of the plot, where the scorned girl becomes the desired young woman, is done by page 93. Marianne and Connell start sleeping with each other again and now we do not know what kind of journey we are on. Still, there are only two possible destinations: they will, within the unbreakable frame of the narrative, end up together or apart and this is enough tension to keep us turning the page. Meanwhile, it is a tremendous read, full of insight and sweetness. The pace is deliberate but far from slow. There is the pleasure of seeing events unfold and these can be surprising though they are mostly “normal” as events go; the Debs dance, a fight in a petrol station, a game of pool.

One way or another, they are also beautiful people and the reader can, for a while, borrow the glow. The fact that Connell and Marianne are elite academics adds to the sense, in the first half of the novel, that we are reading a brilliant young person writing about other young people. Emotions are everything; they are forensically described. Connell and Marianne’s feelings are so real they have a shape, they are sometimes experienced as a physical force. The book switches point of view but it stays very close, so we know how the characters feel but not, somehow, what they are. Rooney’s mastery of tone is complete, we almost fail to notice as the darkness trickles in and the light starts to fade.

From the beginning, Marianne and Connell are aware of “the others”. As they establish an intimate space, the images are of doors opening and shutting; their concerns are about privacy and exposure, about feeling safe or potentially shamed. The lines of power and humiliation that run through the book are not just about the gang at school or the internet’s anonymous crowd, they are more realistically, in Dublin, about social class. The problem of power also plays out between the lovers in an urgent and intimate way. Although they feel, within the relationship, completely private, they cannot protect themselves from each other, nor from their own contradictions as wanting human beings.

They will, you hope, figure it out. Connell is a straight-up guy who will in time deal with his commitment issues. Marianne can guard her heart, to the point of seeming mysterious or cold. Even her mother believes she lacks “warmth” – by which, Marianne says wryly, “she means the ability to beg for love from people who hate her”.

This is a modern heroine, with a dissecting intelligence to keep her safe from her own difficulty and from the projections of others. In this she is like Rooney’s first heroine, Frances, who pushes back very brilliantly, telling her lover: “You’re interpreting your failure to hurt me as hostility on my part”. It is important to be separate. Staying still, being matt black, this will keep you safe. Perhaps this is why the earlier work feels so “cool” in the adolescent sense of the word. Do nothing and you will not be hurt. In fact, doing nothing is something her characters are really good at: the charm and difficulty of Conversations with Friends lay in the lovers intriguing passivity; a sense of drift that might have been modernist, or just modern (is that how people have sex, these days?).

Normal People takes those themes of passivity and hurt and makes them radical and amazing. There is an amount of sex in the book and the sensibility is entirely contemporary, but there is no hint of modernism here. Normal People has the engine of a 19th century novel; there is an encompassing sense of authority in the voice that makes it more terrible when the characters lives start to slip away from them. The book grows up under your eyes: it is so much wiser and more moral than you thought it would be. Rooney is completely in control. Is Connell’s reluctance a personality thing or a mental health issue – or is it just adulthood, a place where difficulties harden and things become clear? At the end, the challenge the lovers face is to own and escape the labels that life has put on them now.

It is tempting to heap pronouncement upon the many pronouncements that will be made about this book and about Rooney, who has already taken her place as an Irish writer of international stature. Normal People brings us all that bit further on. It adds, fearlessly, to an unsettling discussion about submission – I felt I understood something, at the end of it, that I had previously pushed away. But the truth is that this novel is about human connection and I found it difficult to disconnect. It is a long time since I cared so much about two characters on a page.
Anne Enright is the Man Booker winning author of The Gathering. Her latest novel is The Green Road