The Importance of Being Aisling: In Ireland you either know one or you are one

The new Aisling book is imminent. What’s behind the success of this Irish archetype? 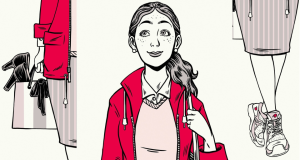 “I’m not an Aisling, but I’d like to be.” This statement is hollered over the noise of a busy Dublin brunch spot as I sit with a group of women, all of whom have read Emer McLysaght and Sarah Breen’s novel Oh My God, What a Complete Aisling, and all of whom have a sense of ownership over the title character. As author John Boyne has said: “Aisling is the real Voice of Ireland. ”

My friend and Boyne’s assessment speaks to the enormous success of the book based on a character Breen and McLysaght first brought to life through a Facebook page in 2008, which both poked good-natured fun at and entirely related to a particular kind of Irish girl.

Oh My God, What a Complete Aisling was released last year and has already found a place in common parlance and Irish culture. Even if they don’t know the Aisling of the novel, they certainly know an Aisling. We all do in Ireland. If you don’t know an Aisling, it is because you are an Aisling. She’s from outside Dublin and goes “down home” at weekends, is going steady with a long-term boyfriend from her hometown and walks to work in trainers (to get her steps in) while carrying her court shoes in a Brown Thomas bag.

She is the sort of person who would run to the dining room on a broken foot before she would miss a hotel breakfast she’d already paid for. Aisling knows where all the lids to her Tupperware containers are. She leaves notes in the office kitchen about wiping out the microwave after you heat up your soup. Aisling is the best of us; the sort of person the world needs.

Oh My God¨, What a Complete Aisling was the No 1 best-selling adult fiction title of 2017 in Ireland, and in summer 2018 the novel was published in the UK, equipped with a glossary that translates some of the more baffling Irishisms such as “gas”, “shift” and “notions”.

Chips on the side

The hotly anticipated second book in the Aisling trilogy, The Importance of Being Aisling, is set for release on September 20th. The women I am having brunch with (brunch is a “notions” meal observed by notions Dublin types, and Aisling would strongly favour a sandwich with chips on the side) tell stories of Aislings they know or work with, or tell stories about themselves in an attempt to prove they are “actually a complete Aisling really”.

So far-reaching is the Aisling phenomenon that Element pictures have acquired the rights to the first book with the intention of making a film adaptation, for which McLysaght and Breen are writing the screenplay. The authors both have backgrounds in journalism and did not expect the character to resonate so deeply with the Irish public or anticipate the general fondness people would feel for the character. McLysaght and Breen have captured a quality in Aisling that speaks to something fundamental in the Irish experience.

A successful work of fiction is bottled lightning; there is an element of pointlessness in trying to understand just what the alchemical composition is that creates the kismet of a commercially rewarding book, and specifically why Oh My God, What a Complete Aisling has resonated so powerfully with Irish people. The book is charmingly written, tender, snortingly funny and sometimes achingly sad.

There are universal elements to Aisling that make her relatable to almost anyone, anywhere, but she is written through a uniquely Irish lexicon – she is the Irish mammy so many of us have and are, and also the Irish daughter, the fish-out-of-water country girl in the big smoke, the young woman simultaneously navigating independence and her desire for a traditional relationship, the Irish person ensconced in a tight community in which they legitimately feel a sense of belonging.

Aisling is the meeting point between old Ireland and the newer, more cosmopolitan version in which Irish twenty- and thirtysomethings are trying to figure out their role, taking with them the best of old Ireland and embracing the opportunities and challenges that come with adulthood in a country that has experienced rapid change in recent decades.

Perhaps more groundbreakingly, Aisling has normalised the psychological characteristic of neuroticism for the modern era. There is no other word for it – she is neurotic; a touch obsessive, meticulous in her planning and execution of almost everything, prone to stress and being judgmental of others. To refer to a woman as “neurotic” has become unfashionable at best, and sexist at worst, but it is the right word for Aisling, and it isn’t a pejorative.

Aisling’s neuroticism arises from her deep conscientiousness and investment in those she loves, and is considered fondly by her reader. She is presented to us as a tender, well-rounded, functional person who is a benevolent influence on people around her. She is caring, independent and robust. She is the sort of person who can function as an individual and can also prioritise others when the situation calls for it. She is a modern Irish woman, and the book presents Aisling’s neuroticism as a realistic element of her character that both benefits and stymies her depending on the context.

For Aisling fans, this new book cannot come quickly enough and the blurb for The Importance of Being Aisling gives us no reason to fear disappointment: “Aisling is 29 and she’s still a complete Aisling. After a tough year, things between herself and John are back on track, and life with Sadhbh and Elaine in their notiony Dublin apartment is more craic than ever. But when a shock change means moving Down Home might be her only option, Aisling is thrown. Can she give up the sophistication of brunch and unlimited Pinot Greej? Will she and Mammy kill each other living back under the same roof? And where does that leave her and John?”

One of my brunch companions, who has been quiet all along, suddenly says (through a mouthful of some fluorescent cocktail Aisling would consider absolute peak notions) – “You know why I like Aisling? Because she’s a heroine for the fussy people like me; the planners, the doers, the people who get made fun of because they always bring a jacket. She makes me feel that I’m grand the way I am, and that I don’t need to be more like anyone else. She makes it a source of pride to be an Aisling.”