The Cow Book: A farmer’s son uneasy return to Longford 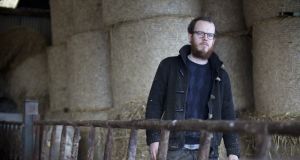 John Connell: The Cow Book tells the story of his relationship with his home-place, livestock, and father

John Connell is from a farm, yet never intended to be a farmer. His life – Canada, Australia – was far-flung and extreme. But here he is, “home again in rural Ireland, back from being an emigrant, here to write a novel, to try and make it as a writer”. As the book opens he is delivering a calf – curiously familiar to those of us who grew up in cities watching All Creatures Great and Small or listening to The Archers (or both, as in my case) – and, despite his vivid, active description, there is a faint, panicked peal in his “to try”, an undertow of despair in “and make it”.

The book begins in January, yet it is April before the suspicions raised by those first lines are resolved: “A great unease and sadness had come upon me and I could no longer see the beauty in anything. I pushed everything away from me in a sort of madness.” This is a book which pauses regularly to savour life’s tiny nows – a newborn lamb’s head, a cup of hot tea pressed into a cold hand – yet also one in which recent history haunts the present. It can be no coincidence of language that he refers to the depression and mania that caused him to move home to rural Longford as “the Past”.

The Cow Book is three stories in one. It is the tale of a single calving season, that exhausting, ceaseless dance with weather, livestock and the never-ending piles of shit that need shovelling. It is story of the cow itself: “Through its relationship with man, the cow has been transformed over the millennia from a mythical animal, a carrier of goods, a maker of galaxies, to a carefully programmed ‘product’ in the food chain.”’ This second narrative is characterised by a different pace to Connell’s own story. Sentences here are longer; the softly hesitant emotion disappears under the weight of information.

Primarily, this is Connell’s story of his relationship with his home-place, livestock, and father. This latter relationship is fractured and regularly angry, and it says a lot for the character of both men that they allow their stubbornness and sensitivities (both in- and over-) such prominence on the page. The book is a series of short episodes, the text occasionally – pleasingly – broken by imagery, and the passage detailing their most ferocious argument is titled “Loser”. Quite late on, Connell admits, “Despite it all, despite our fractious relationship, he has taught me everything I know, everything that I need to be a farmer.”

Connell’s mother isn’t involved day-to-day, yet when she is dragged into the grievances and sulks, her voice is strongest: “Your brother, you, your father, none of you is a farmer. I’d be better without it . . . I’m going to sell the whole thing up.”

She runs a childcare business on the farm, and Connell compares his daily stroll across the yard with some of his mother’s Montessori pupils’ weary parents who commute two hours to and from Dublin, their days lived in a completely different rhythm to his own.

His simple, spare style (“A respect has come between us that was never there before. It is a small and delicate thing, still fragile”) occasionally tips over, repetition creating strain rather than strength (“It was a moment from history. And a moment of history”). At times, the language made me curious as to who The Cow Book’s intended audience really is. Lines such as “‘Oíche mhaith, Ma,’ I say, which is the old language for ‘goodnight’” strike an uncomfortably discordant note coming from a well-travelled Irishman who is not yet 30.

Perhaps the intended audience is one unfamiliar with Ireland, who need to be told that the Shannon is “the longest river in the British Isles”, and that Connell’s granny, the last woman in Ireland to receive the IRA widow’s war pension, is fretting because even though the general election is over, ‘the county has no member of parliament”.

With 139,600 farms in Ireland and a whopping 4.4 million hectares of the country’s 6.9 million hectares used for agriculture, the Connell family’s lifestyle and work must echo that of thousands of others around the country. But this is a personal story. An honest, vivid reckoning of what it’s like to simultaneously belong and not belong, The Cow Book becomes John Connell’s meditation on the real meaning of home and place.