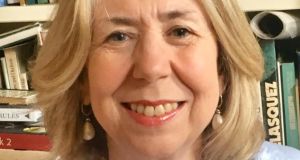 The clear-edged centre of a ghosting
world moves with me from vanished
town and shoreline into the nothing
ahead, aside, that spawns defined
proximities – the rough-cut granite
of pier wall, the shell-flecked paving,
the stone-lipped drop to the lower
level greying to harboured haze.
Figures loom lucid, then fade past.
It is a summer here of sorts. The sun
blurs weakly on, dims off.
An empty bench in close-up blazons
scored initials ringed by jagged hearts.
Somewhere the sea laps whisperings.
No birds today. Gulls, terns that skim
and slice the wind’s clean sweep don’t dare
a world of guess.
Then how was it
for you, mother, your wedding gold
worn thin, loose between knuckle
and knuckle, until it slipped into
some nowhere along shifting
corridors of a home not yours,
where you paced hand in hand
with one old stranger or another,
defining him your own?

Ring a wrong of jangle keys
a pocketful of dearth

Four and twenty blackbirds
chime havoc in the heart

Shrink the heart with shaming
Make it keep account

Twist the song to locking
Pluck the clockwork out

For if the throat should open
if the captive sing

Andrea Ward has worked as a secondary teacher in Dublin and in a school for township children in South Africa’s Eastern Cape. Memoir pieces of hers have been broadcast on RTE’s Sunday Miscellany. Since June 2017 her poetry has been published in Skylight 47 and twice in Crannóg

At the Shell Midden

Even now, we live among layers.
If you crumble or dig,
you don’t know what you’ll find.

Within the layers are lives:
in the Burgess Shale, where Walcott sifted for clues to our demise,
or deep in cores of ice  – eons flaked in a frozen mille-feuille,

and here, under the sandstone overhang
of an Aboriginal shell midden,
where my daughter crouches from a summer downpour.

Layers, other girls, crouch too or, cross-legged,
suck clams from heart-shaped shells,
preserved now in pumice and sand.

Plunge your hand in this cool floor and there are older girls,
women discarded,
gone to shells

when small pox burned them down
like great libraries, unwritten,
lost to eagle and wind.

Where will our layers lie?

And what of all the shells to come?
Sixty millennia yet to whistle through;
my girl’s cotton dress and bucket gone,

her bones gone, tongue forgotten, her tea-parties
another stratum in the midden.
The beach is not ours any more than the sky  –

we belong to the land.
In this long line of girls
hunkers mine, hiding from my calls to come home.

Audrey Molloy was born in Dublin and grew up in rural Wexford. She now lives in Sydney, where she works as an optometrist and medical writer. Her poetry has recently appeared in the Moth, Crannog, The Irish Times, Orbis, Meanjin, Cordite, Banshee and Popshot. Audrey’s work has been nominated for the Forward Prize and she is one of Eyewear Publishing’s Best New British and Irish Poets 2018. She was runner-up for the 2017 Moth Poetry Prize and has been shortlisted for several other poetry awards. audreymolloy.com