People Like Me by Lynn Ruane: From Tallaght ‘daughter from hell’ to Senator 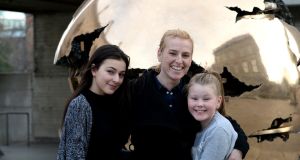 In this compelling memoir, Lynn Ruane tells the no-holds-barred tale of her life story so far. She describes her childhood, growing up in Killinarden, Tallaght, and her gradual slippage from being a “boisterous, giddy and hard-working kid with a love of animals and people to a more hardened version of myself”. A revelation made by her parents when she was nine or 10 (you’ll have to read the book to find out what) turned her into “the bitter, angry daughter from hell”, dropping out of school and family life. She gives a graphic account of these wilderness years, when she was “missing in action”. Readers will inevitably feel immense sympathy for her parents, who spent most nights during that period going door to door looking for her, but who never gave up on her, despite the destructive agenda that was consuming her.

Particularly harrowing is her memory of the death of a close friend, Jenny Hoban, knocked down by a bus in Killinarden on a cold November night when they were all only 11. And this is just one of the many deaths Ruane experienced in her community. She states chillingly in an early chapter that “We were drug users and some of us alcoholics at the age of twelve. We stab each other, shoot each other and batter the life out of each other. It’s the fate of our births, our location, our demographics.” She returns to this theme throughout, writing later that “We are being killed by class. Homelessness, addiction, risky behaviours and mental health are not just statistics to me, they are not the stories you read in the paper, they are my friends.”

Unlike many of her friends, however, Ruane made it through. At 15 she became pregnant and began to turn her life around. Even before her daughter Jordanne was born, she decided to return to school to get her Junior Cert, walking heavily pregnant back through the doors of the local school. On her first day there, a woman said to her, “You have wasted your life. You know that, don’t you?” Ruane says this throwaway, unkind comment has stuck with her all these years. But fortunately, it did not deter her from pursuing her goals. After Jordanne’s birth, she completed her Junior Cert and continued on at An Cosán, the remarkable adult education centre in Jobstown, Tallaght, founded by Dr Ann Louise Gilligan and Dr Katherine Zappone (now Minister for Children).

At An Cosán, Ruane developed the idea of pursuing a career in addiction services, using her own experience of drugs to help others. She was accepted on to the addiction studies programme at IT Tallaght. Shortly after her second daughter, Jaelynne, was born, she was appointed community development drugs worker in Bluebell. One of the funniest episodes in the book is her description of the job interview. She was convinced that one tough, casually dressed member of the panel was a service user. On being told she had got the job, she congratulated the organisation on including a service user at interview; but John Bissett was in fact the chairman of the board, and went on to become an important role model for Ruane. She writes that she would never have considered herself capable of going to university without knowing that Bissett had a PhD beside his name.

With support from mentors such as Bissett, Ruane took up a place on the Trinity College Access Programme (TAP). She felt at home on her very first time stepping into the college’s Front Square, before she ever applied to study there. Many of us with a long association with Trinity, I think, will identify with that feeling of “coming home” upon walking under Front Arch and into that beautiful square.

While an undergraduate, Ruane was elected president of Trinity Students’ Union. She famously went on to be elected in 2016, alongside Senator David Norris and myself, as a Senator for Dublin University, entering the Seanad before she had finished her degree. She is now a hard-working and valued Oireachtas colleague. The final chapters of the book detail her achievements as a legislator, her work on the campaign to repeal the Eighth Amendment, and her ongoing political priorities (although she is, intriguingly, silent on her political ambitions for the future).

Ruane writes that her story is couched in political terms, told through sociological concepts, because she is intertwined completely with her class, her gender and her experience. At times, particularly in the descriptions of her addiction services work, the telling of this story is carried out in somewhat impersonal language; yet it is more powerful when told in the conversational style that characterises most of the text.

Ultimately, however, this is not just Ruane’s personal story. It is also a story of redemption. It’s a story about the importance of community and university-based access programmes, the power of education, the significance in our lives of mentors and role models; the capacity to make change, to turn around lives, to challenge what may seem like fated outcomes. This is a story well worth telling.