The paintings Claude Monet kept secret for himself 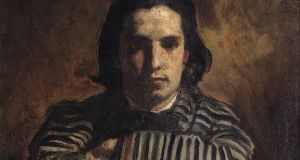 Claude Monet left the Channel port town of Le Havre for Paris in 1859, at the age of 19. His father, a ship’s chandler, was dubious about young Claude’s ambition to become a painter. He kept his son on a tight allowance. Monet ran up bills he could not pay, particularly to his tailor. He earned a reputation as a dandy. “I only sleep with duchesses or maids. Preferably duchesses’ maids,” he told a fellow student at art school.

The father of Impressionism would soon adopt a bushy beard and artist’s beret. Gilbert Alexandre de Séverac’s 1865 portrait is the last record of the cocky, beardless Monet, with floppy dark hair and a striped jacket. The young Monet exudes self confidence.

That portrait was one of the first paintings acquired by Monet in a lifetime of collecting. It is among some 100 artworks in Monet Collector at the Musée Marmottan-Monet in Paris until January 14th, 2018.

Monet was a secretive collector, showing his treasures to only a few visitors at his home in Giverny. The inventory established upon his death was destroyed in a second World War bombardment. It took the exhibition’s curators, Marianne Mathieu and Dominique Lobstein, four years to reconstitute the contents of his collection. They spent many hours poring over archived diaries, letters, wills and the records of auction houses. “It was like a police investigation,” Mathieu says. “As the heir to the largest number of Monet’s works, only the Musée Marmottan-Monet could attempt this.”

The exhibition shows Monet’s paintings in the order he acquired them. It tells the story of his loves and friendships, and the narrative of his growing fortune and evolving taste in art.

Renoir was probably Monet’s closest friend. They shared a studio as struggling artists in the early 1860s. When they painted together at La Grenouillère, a boating resort on the Seine, Renoir focused on working class Parisians in their weekend finery, Monet on the effects of light on water.

In the 1870s, Monet and his first wife Camille settled in the Paris suburb of Argenteuil. Renoir was a regular visitor. The artists were still poor, but Monet rented expensive dresses for Camille to pose in. Renoir repeatedly painted portraits of Monet and Camille, which Monet kept for the rest of his life.

One day in 1874, Renoir arrived in Argenteuil, grabbed Monet’s palette and brushes and dashed off Madame Monet et son fils, of Camille and the couple’s young son Jean, resplendent in the garden, alongside a rooster. Like Monet’s Impression, soleil levant, the canvas that gave its name to the movement, Renoir’s painting was completed in a single sitting and was very modern for its time.

Edouard Manet, who was also painting in the garden at Argenteuil, joked that Renoir ought to give up painting. “They worked in a group. They painted the same themes and they teased each other. Their friendship was very strong,” says Mathieu.

A half dozen paintings in the collection were thank you gifts. In 1892, Monet loaned 15,000 francs to the gentle anarchist painter Camille Pissarro, so that Pissarro could buy his house at Eragny, near Giverny. Monet asked for Pissarro’s Paysannes plantant des rames, a bucolic, pointillist picture of four peasant women working in a field, as partial repayment. After Pissarro’s death in 1903, his son Lucien, also a painter, would give Monet his own painting, L’Eucalyptus, to thank Monet for helping Pissarro’s widow and children.

Gustave Caillebotte, a painter from a wealthy family, subsidised the Impressionists. In 1879, Monet sent paintings to the fourth Impressionist exhibition, despite his preoccupation with his wife Camille’s fatal illness. Caillebotte gave Monet the sketch of Rue de Paris; temps de pluie, his classic scene of Haussmanian Paris, to thank Monet for his participation. When Caillebotte died in 1894, his brother Martial gave Monet Chrysanthèmes blancs et jaunes, jardin du petit Gennevilliers as recognition of the painters’ shared interest in gardens.

Monet and Berthe Morisot, the female Impressionist who was Manet’s sister-in-law, became close friends. He painted a sun-flooded Mediterranean landscape titled Les Villas à Bordighera for Morisot’s new house in Paris’s 16th district. When she was dying, Morisot told her daughter Julie to “give Monet something to remember me by”. Monet had the choice of 300 works in a memorial exhibition, and chose Morisot’s charming portrait of Julie with her pet greyhound.

Monet met Auguste Rodin in 1888. They recognised each other as titans of 19th-century art. Monet gave Rodin one of his seascapes from Belle-Isle. Rodin gave Monet two small sculptures. The Bacchantes s’enlacant, a model for Rodin’s Porte de l’Enfer, was “discovered” for the exhibition by Mathieu in the home of a Monet descendant . On its base, Rodin etched the words, “To the Great Master, Claude Monet, his friend, Rodin.”

Thirty years after he arrived in Paris, Monet was rich and famous. He bought up works by precursors of Impressionism, including Corot, Delacroix, Boudin and Jongkind. In his youth, he had painted with the latter two in Normandy.

In the 1890s and 1900s, Monet purchased more paintings by his old friends Renoir and Cézanne than any other artists. He never approached them directly, but bought through dealers and auctioneers. “He acquires works that he believes to be masterpieces. The collection is no longer simply about friendship,” Mathieu explains.

Monet could be a stubborn collector. He wanted Renoir’s La Mosquée. Fête arabe, a colourful vista of an Arab crowd on a hill above the sea in Algiers. Paul Durand-Ruel, the magnanimous dealer who Monet credited with saving Impressionists from starvation, did not want to part with the painting. But Monet insisted. He paid 10,000 francs, his highest price ever for a painting, after which he reproached Durand-Ruel for charging so much.

Monet also purchased three voluptuous nudes by Renoir. Jeune fille au bain, on loan from the Metropolitan Museum of Art in New York, is the signature painting of the exhibition. “Monet buys what he does not do himself,” Mathieu explains. “He buys nude bathers, when he has never painted a nude. He buys orientalist scenes, when he was interested in japonisme, not orientalism. He wants paintings that raise the questions he’s asking but offer different solutions.”

In his own painting, Monet sought to capture fleeting moments, whereas Cézanne was interested in volume and solidity, the permanence of things. That difference intrigued Monet, who bought major works by Cézanne including Le Nègre Scipion, of a sleeping African worker, Neige fondante à Fontainebleau and Baigneurs. When he purchased Fontainebleau at auction, through an agent, Monet made sure his name appeared on the record, to drive up Cézanne’s prices.

Ernest Hoschedé was a wealthy textile factory and land owner, and, until he went bankrupt in 1877, a patron of Monet. From 1878, the Hoschedé and Monet families shared a house, to save money. Alice Hoschedé nursed Camille on her deathbed. After Camille’s death, Alice and Monet fell in love. Ernest discreetly absented himself, and Monet raised the Hoschedés’ five children. Monet married Alice in 1892, after Ernest’s death.

Monet’s complex, reconstructed family life influenced his collecting. While Alice lived, he refrained from hanging portraits of Camille in the house at Giverny. He purchased family portraits of the Hoschedés as a way of telling his second wife and step children that he loved them. After Alice died in 1911, Monet bought Carolus Duran’s portrait of her for himself.

Now regarded to be some of his greatest masterpieces, Monet’s water lilies, which he painted with failing eyesight in old age, were considered near worthless wallpaper for much of the 20th century. He kept a painting of willow trees reflected in the lily pond until his death at the age of 86. It provides a fitting close to this homage to Monet’s lifetime of painting and collecting.