‘Starchitect’ Jean Nouvel discusses his design for the immense gallery 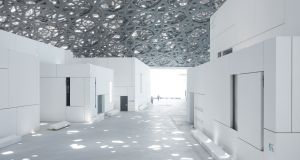 The Louvre Abu Dhabi will open its doors to the public on November 11th, 10 years after the Gulf sheikhdom concluded an agreement with a consortium of 13 French museums and cultural institutions called Agence France-Muséums.

Under an agreement costing more than €1 billion, Abu Dhabi will be able to use the Louvre’s name for the next 30 years, and will receive 300 works of art on loan for a decade.

The French “starchitect” Jean Nouvel was hired to design the museum. He created an ensemble of 55 individual buildings, most of which shelter under a giant dome 180m in diameter and weighing as much as the Eiffel Tower. From a distance, the museum looks like a silver mushroom, or a spaceship hovering over the turquoise waters of the Persian Gulf.

Nouvel, aged 72, dresses in black. With his stocky build, bald bullet head and deepset dark eyes, he is a dead ringer for the late US actor Telly Savalas. If you didn’t know he was one of the world’s leading architects, laureate of the Pritzker Prize, the “Nobel” of architecture, and at least a dozen other international awards, you might mistake him for a bodyguard or a night-club bouncer.

In his youth, Nouvel dreamed of being an artist. His parents, both teachers, thought architecture would be more remunerative. He is a powerful force in architectural debates, and infuses his speech with philosophical and poetic expression.

Nouvel has guaranteed the Louvre Abu Dhabi building will last at least a century. “It’s like a cathedral,” he told the Anglo-American Press Association. “I didn’t make it to become obsolete in a few decades. One builds for a people, for civilisation, for mankind.”

Nouvel hates what he calls “interchangeable” buildings. “I’m a contextual architect. That means buildings must know where they’re from. More and more buildings are designed quickly, by computer. You change a few parametres and in a quarter of an hour the design is adapted. You can earn a lot of money that way, but these buildings don’t know where they’re going. They’re parachuted.”

Nouvel calls the factors which an architect must consider – his clients’ wishes, history, geography, temperature, terrain, wind and vegetation – the “parameters of contextuality”. His design for the Louvre Abu Dhabi, for example, would be totally inappropriate in Paris, London or New York.

Outsize white “boxes” serve as high-ceilinged art galleries with stone carpet floors. Nouvel’s associate, the Lebanese architect Hala Wardé, refers to the high-performance white concrete facades as “panels”. Nouvel interrupts: “For me they are not panels, but Cyclopean stones.” Cyclops was the mythical Greek giant who alone was able to move massive limestone boulders.

“Great Arab architecture is always about geometry and light,” Nouvel says. The huge silvery canopy of the Louvre Abu Dhabi balances on four unseen piers, enfolded within the medina. It creates an environmentally efficient “micro climate” that shields visitors from Gulf temperatures that go as high as 50 degrees.

The museum is an island on an island, with pylons for docking boats and water lapping its squares and walkways. “Desert sand, water, the sea and its horizons,” Nouvel summarises. “The museum is made from those parametres. When one speaks of universality, what happens beyond the horizon is always an opening. The sky is enormously important.”

Like Brunelleschi’s Renaissance cathedral in Florence, Nouvel says, his design has “a dome on the outside, a cupola inside. Between the two there is a structure”. It is comprised of eight layers of steel and aluminium plaques, cast in a geometric, Arab design. “Each layer is rotated in relation to the layer above.”

The rotation changes the size of the holes in the star-like pattern, allowing more or less light to pierce the dome, in what Nouvel calls a rain of light. “The effect is similar to that of sunlight refracted through the cracks in the roof of an Arab souk, where you see dust suspended in the air. The second reference in my mind was light filtered through leaves in a palm grove.”

When tests were carried out in Stuttgart, Germany, and on a scale mock-up in Abu Dhabi, Nouvel found that even the 5 per cent of sunlight he intended to allow through was too much. In the finished museum, “Only 1.8 per cent of light goes through all layers of the dome,” Hala Wardé says. “We reduced the light to achieve the effect and level of comfort we were seeking.”

The Gulf sun is like a giant projector, Nouvel says. “The rays pass through these perforated plaques. When the sun reaches its zenith, the light falls vertically, and lengthens like stalactites. For the summer solstice on June 21st, there are vertical columns of light. But if you go at dawn, the rays are more horizontal. There is a permanent play of light according to the time of day: more spots to the east in the morning, in the centre at noon, to the west in the afternoon. The spots fall on the water too. It creates a well of light, an extremely calm atmosphere.

“There’s a feeling of quietude linked to the slow appearance and disappearance of spots of light,” Nouvel says. “It conveys the consciousness of time, of eternity. The dome is a cosmic object, not unlike a sun dial, tracing the path of the sun.”

The museum will open from 10am until 10pm, and Nouvel expects evening hours to be busiest. At night, moonlight will illuminate one side. Lighting within the structure will make the dome appear starry, both from within and outside.

Nouvel and Wardé worked closely with the Agence France-Muséums on the the content of the galleries. They bridle at a suggestion that France thought it was taking culture to people who had none. The artworks come from all over the world, from Asia and Africa as well as Europe, Wardé notes.

Each gallery explores a different, universal theme, including maternity, funeral rites, power, the representation of the divine, the exploration of unknown lands and the beginning of globalisation. Works are presented in chronological order and range from an ancient Central Asian statue of a Bactrian princess to an Egyptian sarcophogus, Japanese screens, an Ottoman helmet, French impressionist paintings and a monumental work by the Chinese artist Ai Weiwei.

Nouvel sees the museum as a place of dialogue between civilisations. Wardé says it embodies “the essence of the Louvre, created at the time of the French revolution to be a universal museum, open to all”.

In conclusion, Nouvel returns to his theme of interchangeable versus contextual architecture. The Louvre Abu Dhabi “is a project that does not belong to the family of cloned or parachuted objects. It is an object that knows exactly why it is the way it is, an object that has roots.”

Reports of ill treatment of thousands of migrant workers

The Louvre Abu Dhabi is part of a €20 billion development project for a “cultural hub” on Saadiyat Island, which will include branches of the Guggenheim Museum and New York University.

Saadiyat means “happiness,” but the project has been stained by reports of ill treatment of thousands of migrant workers from Bangladesh, India and Pakistan.

Human Rights Watch published three reports between 2009 and 2015, detailing abuses that in some cases amounted to forced labour.

Recruitment agencies charged labourers exorbitant fees that left them deeply indebted before they started working. On arrival in the United Arab Emirates, workers were presented with contracts they did not understand, offering wages as low as half what they had been promised. Wages were paid late or withheld. Workers’ passports were systematically confiscated by employers. Some endured unsafe and unclean living conditions. Those who protested were deported.

Two UAE government agencies drew up charters for contractors that were intended to stop the abuses. The UAE passed new labour laws. But these were insufficiently enforced.

Human Rights Watch has been unable to continue investigations because its researchers were banned from the Emirates in 2015. Artists and intellectuals who criticised the treatment of workers have also been refused entry.

Conditions on the site were “an old question”, Jean Nouvel, the architect of the Louvre Abu Dhabi told the Anglo-American Press Association recently. “We saw the place where workers lived and checked conditions. It was very correct, with air conditioning,” Nouvel said. “There were 5,000 workers on the site, with security, perfect treatment. For me, conditions were the same or better than in other countries . . . It’s not the worst conditions I met in my life . . . We saw no problem.”

This was “not an answer about general working conditions in the Middle East”, Nouvel admitted, adding: “That’s another question”.