Paranormal activity in the Derry air 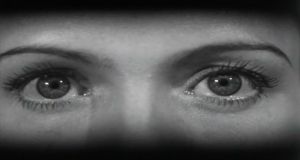 Susan MacWilliam’s Kathleen is a 33-minute film made by artist Susan MacWilliam in 2013. It was an Individual Artist Commission from Derry City of Culture 2013. MacWilliam set about researching locally to find a subject that appealed to her.

Given her track record, that was likely to be a subject related to the paranormal: from the late-1990s, she had become more or less exclusively preoccupied with the area, delving into spiritualist cases, psychic research and what might be termed the paranormal subculture. Happening on material about Derry writer Kathleen Coyle (1886-1952), she was intrigued.

Coyle wasn’t a medium, but she managed to lead a busy, creatively productive life, while remaining outside of the cultural mainstream, maintaining an apparent indifference to conventional rules and expectations.

And, as it happened, she had worked with a spiritualist for a while, and had contributed articles to Tomorrow magazine, which was run by celebrity Irish medium Eileen Garrett, who was a major research interest for MacWilliam. That coincidence clinched it, and Coyle became her subject.

Using Coyle’s writings and a range of imagery relevant to key episodes in her life (childhood illness, the death of her beloved dog), MacWilliam’s essay film makes a bold stab at getting inside her subject’s head and capturing the workings of inner life, of how, as she said, “we navigate life, how we may be in the present while thinking of the past and wondering about the future. As such we jump about, we repeat, we follow tangesnts”. Cinematically, you might find echoes of Alfred Hitchcock and Luis Bunuel.

Kathleen is included in Modern Experiments, a compendious touring survey exhibition of MacWilliam’s work from the late 1990s, at the Butler Gallery in Kilkenny Castle (October 28th-December 17th).

Usually MacWilliam more directly addresses the paranormal. The genius of her immersive installations, films and other works is that they deal with it matter-of-factly, neither deriding it nor professing faith in it, but treating it as an object of legitimate historical research.

Modern Experiments features quite a bag of tricks, from video recreations of the seances of ectoplasmic Scottish medium Helen Duncan (the last person to be tried as a witch in the UK) to the stage act of Pakastani mystic Kuda Box, who read from newspapers and wrote while blindfolded.

The daughter of Eileen Garrett recalls her mother’s rapturously received New York appearances in the 1930s.    MacWilliam performs in her 1999 video, Faint. In 19th-century attire she enacts a faint, an allusion to the tendency of the overwhelmingly male medical establishment of the time to diagnose hysteria in female patients. Time and again in MacWilliam’s projects there is an implication that those who are marginalised or otherwise patronised and excluded will find outlets for expression beyond the dictates of convention.

How do I get my teenager off her phone and back reading?
3

One ping after another: Why we all need a notification detox
6

Casting a Jesus or George Washington? Only Tom Hanks will do
Real news has value SUBSCRIBE