The magic and mystery behind Ireland’s favourite painting

The painter of ‘Hellelil and Hildebrand, the Meeting on the Turret Stairs’ hated the smell of paint 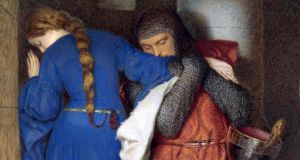 Hellelil and Hildebrand, the Meeting on the Turret Stairs (1864) by Frederic William Burton Photograph: courtesy National Gallery of Ireland

Hellelil and Hildebrand, the Meeting on the Turret Stairs (1864), a painting in the National Gallery of Ireland by Irish artist Frederic William Burton (1816-1900). Based on a medieval Danish ballad about the ill-starred love between Hellelil and her bodyguard, Hildebrand, it features the lovers sharing a fleeting moment of intimacy.

Things don’t go well for them. When her father discovers their attachment he orders that her seven brothers should kill Hildebrand. But the bodyguard turns out to be a formidable adversary and, after he has dispatched six of the brothers and Hellelil’s father, she intervenes to save the life of her surviving sibling. Hildebrand succumbs to his wounds and she decides she cannot live without him. Burton’s friend Whitley Stokes had translated the ballad into English.

Just shy of one metre tall, it is a substantial painting. What makes it unusual is that it is painted in watercolour, a medium associated with a much smaller scale (plus some gouache, a water-based paint that is more opaque than watercolour). Burton could not tolerate the smell of oil paint or, more likely perhaps, the solvents associated with it, and avoided it. The composition was calculated to the tiniest detail – and there’s a lot of detail – in preparatory sketches and built up painstakingly with fine-haired brushes, resulting in an almost hyper-real image.

Because it is a watercolour, the painting poses problems for conservators: it could fade drastically with exposure to direct light. Usually it is kept in a special cabinet behind closed doors which are opened for just one hour, four days a week, possibly adding to its allure. But the painting plays a starring role in a temporary exhibition, Frederic William Burton: For the Love of Art at the National Gallery of Ireland, October 25th -January 14th (€15, students €5, plus other concessions, booking nationalgallery.ie). For the duration of the exhibition, whenever you visit, you’ll see the Meeting on the Turret Stairs.

Is it well known?

Quite well known. Surprisingly, in 2012 it topped the poll as Ireland’s favourite painting, ahead of works by more high-profile artists. Curators at the NGI weren’t that surprised. They know how popular the work is with visitors, including among secondary school groups. The postcard is a perennial bestseller in the gallery shop.

It’s exceptional, but typical in many ways. Burton associated with the Pre-Raphaelites and, like them, revered the old masters and preferred paintings that tell a story, often with a moral. His mentor, the great antiquarian and artist George Petrie brought him to Connemara to draw at historical sites. Burton’s The Aran Fisherman’s Drowned Child is another favourite in the gallery. When he was appointed director of the National Gallery, London in 1874 he gave up painting but contributed greatly to the development of the gallery, overseeing significant acquisitions of work by Leonardo da Vinci, Botticelli, Holbein and many others.

7 Welcome to Dublin, unless you're black