As an artist, William Crozier exuded certainty and self-confidence

The William Crozier exhibitions at IMMA and Taylor Galleries 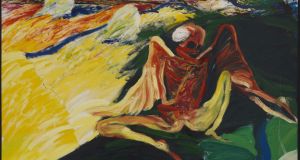 Speaking in 1989 about David Donaldson, one of his tutors at Glasgow School of Art in the 1950s, William Crozier said one of the things that made him a particularly sympathetic teacher was that: “(He) always treated me as if I was already what I intended to be.” It’s something that Crozier clearly took to heart. As an artist, he exuded certainty and self-confidence. Perhaps his unwavering work ethic also had its roots in art school, of which he remarked: “It was very, very simple – you painted from 9am to 6pm every day and then drew from 6.30pm to 9.30pm every night.”

Thought he was born at Yorker, Glasgow, in 1930, both Crozier’s parents were from Co Antrim, and his connections to Ireland  were forever important to him. While he was completely against insular notions of identity (more than once describing himself as European), by the time of his death, in 2012, he had become a prominent figure in Irish art. He and Katherine Crouan established a base in West Cork in the early 1980s and spent more and more of their time there. He was best known for vibrant, boldly patterned, chromatically intense compositions, largely inspired by the landscape around them at Roaring Water Bay. The Edge of the Landscape, a fragmentary and less then satisfactory exhibition at IMMA, patchily touches on this work but largely addresses an earlier phase of his career, when he first established himself as a painter in the late 1950s, extending on to the mid-‘70s.

Immediately after graduation, he went to Paris because it, rather then London, was the centre of his artistic world. Having been bowled over by Sartre – a lifelong interest – and other French writers, and immensely respectful of Picasso and Matisse, he felt he was in a sense heading home. He’d been there before, briefly, aged 17. Now, however, his hair was blond and his accent Glaswegian, and he was often mistakenly thought to be German, not good a mere seven years after the war. But he persevered and immersed himself in the culture of the Left Bank, which remained throughout his life his ideal of a haven of intellectual freedom and possibility.

A large chunk of the mid-1950s he spent in Dublin. He met and befriended Anthony Cronin, later (in 1963) joining Cronin near Malaga for a nine-month Spanish sojourn that was, he said, vital for him artistically. For one thing, it crystallised Sartre’s existential ideas in the reality of Franco’s regime. The heat, and starkly contrasting light and shade of Southern Spain are evident in works that Cronin aptly described as “sinewy abstractions of the vines and hill paths of Alhaurin”, where they resided.

The light, colour and chiaroscuro of Spain provided an enduring legacy for Crozier’s future work. Meanwhile, though, back in 1950s Dublin, he designed and painted theatre sets, an experience that also shaped his future way of working, including his insistence that a picture had to be clearly stated, visually, and resolved by the time he left the studio in the evening.

He went on to the Bohemian enclave of Soho in an otherwise “seedy . . . mediocre” London, and was immediately taken up by galleries. Resisting the lure of aligning himself with any group or school, he recognised that his work might be seen as set on an expressionist trajectory, but eventually came to the conclusion that he was not an expressionist. Associated with a number of up-and-coming artists, mostly from abroad, at the Drian Gallery, he recalled: “I was very vain. I thought I was much better.” Certainly he was quickly regarded as one of the major new talents in British art.

Winter spent in an Essex cottage in 1958-1959 produced a powerful series of dark, gestural, landscape-related compositions. English pastoral is brusquely eclipsed in evocations of blasted, wintry, blackened expanses where the stubble has been burned off. Crozier termed it the “Essex Wilderness”. The sense of foreboding was informed by lurking Cold War anxieties about nuclear conflict and the prospect of a post-apocalyptic wasteland. In discussing this work in some detail, William Laffan noted that Crozier had been on the first Aldermaston March organised by the Campaign for Nuclear Disarmament in 1958.

As well as the vegetative life twisting vigorously through the Spanish and Essex paintings, the human form becomes increasingly important in the 1960s, not distinct from but ambiguously and seamlessly intertwined with the landscape, rather like the sacrificial victims, the preserved bog figures, that subsequently preoccupied Barrie Cooke and Hughie O’Donoghue. This human presence assumed skeletal form when Crozier visited Bergen-Belsen. Hia treatment of these presences embraces the extremes of tragic victims and costumed, carnivalesque performers.

It is impressive just how present, how vitally engaged the artist is in the paintings made in the 1950s and 1960s. There is an economy of means, a rawness and a nervous energy that still impress. All of that slackens in the 1970s. Not invariably so, but by the time he arrives at Crossmaglen Crucifixion in 1975, the energy of his pictorial vocabulary has lessened and the process has a formulaic ease. While the central, flayed-looking red figure with a skull head of Crossmaglen is clearly emblematic of the victims of sectarian strife in Northern Ireland, the work doesn’t achieve the symbolic force to which it aspires.

From the mid-1970s Crozier reversed the trend in his work towards increasingly explicit figuration, though he seems to have tried alternative approaches to it later. Yet, look at his 1982 painting, The Rowan Tree, and it is clear that nothing has been lost and much gained by this trend. The inspiration for this painting was a glimpse of a tree in a protective cage struggling for life on a piece of municipal green space in London. It’s infinitely more effective than the laboured symbolism of the crucifixion.

The evidence of his later landscape and still life work (some there to see at IMMA, more at the current Taylor Galleries show) is that this principle held true. All of the concerns he wished to address he could address most effectively in terms of a pictorial language that didn’t strain for conscious significance. All of life, death and the world is there, distilled from decades of experience and hard work.