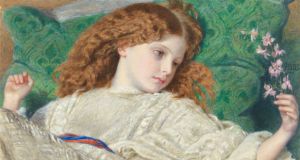 In 2012 Frederic William Burton’s Hellelil and Hildebrand, The Meeting on the Turret Stairs, inspired by a story of doomed love in a medieval Danish ballad, was voted Ireland’s favourite painting from a shortlist of 10. Yet he could still, in many respects, be regarded as a forgotten figure in Irish art history.

That is how Marie Bourke, the curator of an extensive new exhibition on the artist at the National Gallery of Ireland, began to think of him when his work first engaged her attention, some 30 years ago. She immediately began to research his life and work. This exhibition is the culmination of her efforts, and she reckons is will be a revelation for most visitors.

Apart from many of his own works, there are pieces by his artistic peers and friends. In his time – he was born in 1816 and died in 1900 – Burton was highly regarded as a gifted, industrious artist, a respected scholar and director of London’s National Gallery for 20 years. As an artist, though, he somehow disappeared off the cultural radar within a few years of his death.

That could partly be because, as Bourke describes him, he was not a hugely social person. He lived quietly and did not entertain on any scale, for example, despite his public role as National Gallery director, although he was frequently a dinner guest of others.

Despite having many friends he was, Bourke suggests, an observer of the social scene rather than a participant. He was slow to judge, careful and thoughtful, whereas someone such as Hugh Lane was sharp, quick-witted and dynamic. A question put to Burton was much more likely to be met with a long pause than with a prompt reply.

His caution and deliberation could exasperate his trustees at the National Gallery, who feared desirable paintings would be snapped up by others while he dithered. But they repeatedly renewed his five-year terms as director.

Burton was born in Co Wicklow, although his family does not seem to have lived there at any point. His family seat of his father, Samuel Frederick Burton, was Clifden House, near Corofin, in Co Clare, although his home may have been, at least for a time, at Mungret, across the county border in Limerick. Samuel Burton was an amateur painter. He and his wife, Hanna Mallett, seem to have led increasingly separate lives.

The evidence indicates, Bourke says, that Mallett, an exceptionally resourceful and independent spirit, brought up the young Burton. When he was just two, illness or accident stymied the development of his right arm and hand, a lifelong condition.

That his flair for drawing was apparent from an early age suggests he was naturally left-handed. He trained as an artist in Dublin and became a Royal Hibernian Academy associate aged just 21, and a full member two years later. Struck by his drawing skills and his application, the artist and antiquarian George Petrie brought him on a survey trip to the west of Ireland, documenting ruined sites.

It was, Bourke believes, a crucial experience, opening his eyes to archaeology, cultural identity and history and, significantly, enshrining the west as a magical place in his heart for the rest of his life.

Painted everyone who was anyone

Bourke was initially struck by the observational accuracy of one of his best-known paintings, The Aran Fisherman’s Drowned Child. Every detail of this documentation of pre-Famine life, from 1841, is thoroughly researched and precisely recorded. It is a trove of historical information.

In fact its exhaustive scholarly accuracy may pinpoint a limitation in Burton as an artist: copious research is on display, as is technical skill, but little in the way of pictorial flair.

Two visits to Germany in the early 1840s broadened his horizons further and familiarised him with the work of the old masters. In Dublin, meanwhile, he established himself as a portraitist, and was commissioned, as Bourke puts it, to paint “everyone who was anyone” – 60 of the 101 works he exhibited with the RHA over a 25-year period were portraits. Exceptionally, he worked in watercolour, not oil, throughout his life.

By 1850, Bourke says, he had reached a peak in his career when disaster struck. His two elder brothers died in quick succession, aged just 41 and 39. He was bereft and shaken. The evidence is that he contributed from then on to supporting their families.

Quite soon he embarked on a prolonged stay in Germany, where he reputedly worked for King Maximilian II of Bavaria, making copies of paintings. He also saw a great deal of art and studied it intensively. Instead of resettling in Dublin he went to London, which was brave, as he had to establish himself there. He did so with some resolve, at first renting a cottage in Chelsea and, a few years later, buying a house in Kensington.

He admired the pre-Raphaelites, and befriended Edward Burne-Jones and John Everett Millais (who was to veer away from the movement’s stylistic principles). The Meeting on the Turret Stairs, which Burton painted in 1864, could be regarded as a pre-Raphaelite work, and an outstanding one. It earned the approval of Mary Anne Evans. Evans – better known as the novelist George Eliot – and Burton already knew each other (they first met in Germany), and they became friends. She even invited him to accompany her and her partner, George Henry Lewes, on a trip to Italy (which he did). Burton did a fine portrait drawing of her, and it is included in the show.

Burton was friendly with his predecessor at the National Gallery, William Boxall, who was also a watercolourist and portrait painter. Boxall favoured him as a successor, and William Gladstone, the British prime minister, approached Burton about the position, which he took up in 1874.

Two of his trustees were particularly active and relevant: Austen Henry Layard and William Gregory. The latter was the future husband of Isabella Augusta Persse, probably better known by her married name, Lady Augusta Gregory. She and Burton became good friends, sharing a deep interest in Ireland’s cultural heritage.

Both Layard and Gregory were keen on developing the gallery and building the collection, with definite ideas and their own professional contacts. Another complication for Burton was that, rather than having an acquisitions fund at his disposal, each case had to be argued. Between bequests, gifts and purchases, he did well during his 20 years in adding more than 500 works to the collection, including several landmark pieces by such artists as Leonardo da Vinci, Sandro Botticelli, Piero della Francesco and Hans Holbein the Younger.

It’s inconceivable that you could acquire Holbein’s Renaissance masterpiece The Ambassadors today, to take but one example, no matter how much money you had to spend. Burton’s didactic ideals for the gallery did lead to more questionable additions, including high-quality copies of Spanish paintings and a set of mummy portraits (now in the British Museum). Once he began his directorship he seems to have painted little, then not at all, although he continued to exhibit work occasionally. He retired in 1894.

Burton’s personal life remains something of a closed book. Bourke notes that he had a housekeeper but no other servants, and lived quite austerely for a person of his social standing. He was in his 50s when he was commissioned to paint a portrait of Mary Palliser of Comeragh House, in Co Waterford, which is included in the show. He and Palliser grew close and, despite more than 20 years in age difference, became engaged. The engagement was put on hold, however. Indefinitely so, for reasons that remain obscure. Eventually, in 1879, his betrothed succumbed to pneumonia.

Bourke believes that Burton deserves his place in Irish art history and that there is much more to learn about him. “This isn’t a definitive retrospective,” she says. “Nothing like it. It’s about opening up the subject of Burton for discussion.” –

Frederic William Burton: For the Love of Art is at the National Gallery of Ireland, Dublin, until January 14th; nationalgallery.ie