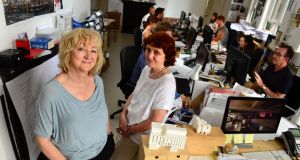 Yvonne Farrell and Shelly McNamara of Grafton Architects, in their office in Dublin. They have chosen to curate the 16th Venice Architecture Biennale. Photograph: Dara Mac Dónaill

For Grafton Architects’ Yvonne Farrell and Shelley McNamara, the signal honour of being appointed as curators of next year’s Venice Architecture Biennale has turned out to be a double-edged sword as they are now faced with the challenge of raising €2.5 million towards covering its costs.

On top of investing considerable effort in organising up to 100 participants in the main exhibition and co-ordinating contributions from nearly 60 countries – all referencing their chosen theme of Freespace – they must spend rather more time than they imagined on fundraising.

Freespace is about an underlying “generosity of spirit and a sense of humanity at the core of architecture’s agenda, focusing on the quality of space itself” by giving something extra to the users of buildings and the public in general and promoting new ways of seeing the world.

As the first Irish architects to curate the Venice Biennale, they may expect support from the Department of Culture and Heritage and from the Arts Council, but they’ll also need significant private sector sponsorship from companies and individuals to bridge the funding gap.

At a recent presentation of their plans, both Farrell and McNamara stressed the enormous scale of the biennale, pointing out that the main exhibition spaces in Venice’s Arsenale and Giardini are “equivalent in scale to O’Connell Street in Dublin”, if they were laid end-to-end.

They aim to show “Ireland’s ability to stage an exhibition on a world scale” because it will, in effect, be “Ireland on show” when the 16th Venice Architecture Biennale opens next May. “We’re not wearing green jerseys, but we’ll be very proud to make something that is world-class.”

Major sponsors will be invited to a press tour of what’s planned next spring, taking in Paris, Berlin, London and New York, while individual donors will get free tickets to the opening of the biennale and other benefits at what’s been billed as “the greatest architectural show on Earth”.

The Boys in the Band is theatrical, dated and utterly fabulous
6

Lawrence of Arabia – and Ireland
Real news has value SUBSCRIBE