And in Tableau, Eithne Jordan shows why she needs to paint 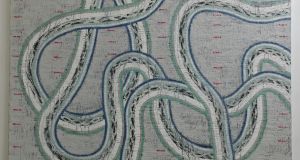 ★★★★★
Reproductions don’t do justice to John Noel Smith’s paintings. That’s true of most paintings, though by no means all: despite the compromises, many can be effectively if approximately summarised in postcard form.

And it’s not because Smith’s paintings are more abstract than representational. An image gives you something to hang on to, certainly, but then, Rothko’s paintings make brilliant postcards, to take one extreme example, as do Sean Scully’s.

Smith’s paintings infrequently use actual images of things, but they almost invariably employ motifs and patterns. And they do so in a way comparable to tapestry and other woven forms.

Like tapestry, as well, they are very tactile. You can’t, unless you happen to own one, run your fingers over the surface, but get up close and their textural generosity quickly envelops your eyes.

Endlessly obedient and versatile, oil paint can be taught to behave like watercolour, in thin, hardly-there glazes, or it can be a luxuriantly material medium. Smith goes for the material end of the spectrum.

Oil paint is also a brilliant mimic. It can imitate almost anything or, for that matter, anyone. Smith doesn’t allow it to fall back on mimicry. He insists that paint be paint. Far from being a restriction, that turns out to be a liberation.

A teeming, non-stop energy runs through the work in Moving Lines, as though the paint has a pulse. But, should we need them, we are never at a loss for references. The ambiguous Lines in the show’s title could easily apply to lines of interpretation, because a limited visual vocabulary turns out to frame a wealth of potential meanings, without tying itself down to any one of them.

This doesn’t imply evasiveness. Possibilities abound. Some of the Moving Lines are looping, interlocking forms that equally evoke intestines or the elaborate knot patterns found in illuminated manuscripts such as the Book of Kells.

Snaking through the centre of these coils are two stranded lines suspiciously like the double helix of DNA. Add string theory to the mix – you have to, really – and you get an idea of the overview. None of these threads of reference amounts to anything like the one, true meaning of what we are looking at – there isn’t one – but all of them contribute to the sense of a mind in which various, myriad ideas are at play, as they usually are.

It should be added that Smith has a great, often unpredictable sense of colour. He might use potentially jarring combinations, but they never jar. Accommodation is negotiated, though it might take you a while to notice that, and so much else, in a superb body of work.

One of the most densely populated paintings in Eithne Jordan’s exhibition Tableau at the Hugh Lane features a cast of just two: one seated customer and one waiter in a café. Coats hang on a rail in the background, so there are some other people somewhere around, unseen.

The high-ceilinged, pillared room might be in an art museum, as are the settings for a great deal of the work, including a study of the entrance hallway of Charlemont House itself. As with Charlemont House, most of the other buildings Jordan looks at have been repurposed, finding new cultural and civic functions.

That they are communal, public spaces is clearly central to their attraction for the artist, but she avoids the crowds. Rather than hundreds of visitors straining for a glimpse (or a smart-phone snapshot) of the Mona Lisa in the Louvre, for example, we find a couple calmly examining an unspecified work under the eye of a watchful attendant in a vast, otherwise empty gallery. Jordan pinpoints the nature of the gallery space (and the museum or the church), as straddling the public and the private.

Whatever the undoubted intentions of those who design and tailor the setting and its contents, each individual’s experience of it is unmistakably personal and private.

Time and again in the paintings, we are presented with such signs of recent or pending occupancy and activity in the form of rows of empty chairs, or benches, or a reception desk, or tables awaiting the arrival of visitors or, in one case, the deserted anatomy room of the College of Surgeons.

Yet the scenes are framed informally, even casually, so that we always get a sense of an individual, in the space, observing it from her – the artist’s – point of view, rather than, say, the suggestion of an objective, overall architectural study.

The spaces may be empty, in other words, but we see them as experienced by someone walking through them or standing in them. That someone is Jordan.

She uses her own digital photographs as sketches for small gouache paintings and larger oils. The gouaches are finished works in themselves, not preparatory studies for the oils. Mostly, detail in the gouaches is slightly more articulated then in the larger oils, the opposite of what we might expect. But fine detail is never an aim in either. Both are painted with quiet, cool neutrality, with no expressive flourishes. Light falls across a scene, and Jordan tries to record the scene as the light defines its dimensions: flat planes, curved forms, embellishments and details.

The walls of the first-floor gallery rooms of Charlemont House have been repainted for the show in colours drawn from several historical examples (the White Cube is a relatively recent phenomenon in gallery design).

While the rationale for this is obvious enough, the result is not entirely convincing in that it does not particularly add to the paintings, or the setting. The paintings don’t need it, for one thing, but it doesn’t detract from them, either.

The rooms-within-rooms structure of Tableau encourages the kind of slow, patient engagement with spaces and things, including paintings, that has been and is being eroded by the exponential growth of digital communications technology. Still, one feels that Jordan paints not to deliver a message, but because she loves and, more than loves, needs, to paint.