Seven things to see at the Imagine Arts Festival in Waterford

Waterford’s big weekend is jam-packed with music, books and exhibitions – and blaas 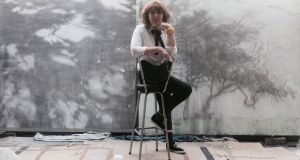 Einstein a go-go: Bernadette Kiely’s exhibition “I never think of the future, it comes soon enough” is at Greyfriars Gallery as part of Imagine Arts Festival

This year, Waterford’s Imagine Arts Festival, which runs until October 29th, has extended its programme to include the Waterford Writers Weekend, as well as the John Dwyer Trad Weekend.

It’s a jam-packed weekend, with live events, exhibitions and interactive performances that celebrate the arts in Waterford. And blaas get a look in, because of course they do.

On Saturday October 21st, the Imagine Music Trail kicks off at 5pm in Phil Grimes’s Bar and it includes Big Bang, Central Hall, Oatsie Jones and Kila. If strolling around is not your thing, you can catch Bill Ryder Jones, formerly of The Coral, on October 28th in St Patrick’s Gateway Centre or Martin Stephenson and the Daintees in the same venue on October 27th.

The Waterford Writers Weekend (October 20th to 22nd) has a particularly vibrant line-up. Make sure you catch Tramp Press’s Lisa Coen and Sarah Davis-Goff’s free event, where they tell you How not to approach publishers, which takes place on Sunday in the Parlour Vintage Tea Rooms.

Father and daughter duo John and Fatti Burke will discuss their illustrated guide to the county, Waterfordopedia, on Sunday in Garter Lane (€4/€12 for family of four). And you can join Sally Rooney, Ciarán McMenamin and Eithne Shortall in the Medieval Museum on Sunday as they discuss the success of their first novels with Rick O’Shea (€7).

And now, on to the blaas. The celebrated floury bap finds its glory in Battle of the Blaas, an interactive, family-friendly battle – sorry, blaa-ttle – experience set in the year 3017, where different tribes fight to claim the origins of the blaa. This is a free event but it’s advised to book your space ahead on the festival’s website to avoid disappointment. Costumes are welcomed and all participants must wear goggles. Don’t say you weren’t warned.

On Tuesday October 24th, join the Special Effects Mask Making workshop in the Rogue Gallery (€20) or venture over to the Gallery of Modern Art for a free talk with the innovative and thought-provoking visual artist Aideen Barry.

And Bernadette Kiely will be channelling Einstein through her art exhibition, which is inspired by one of his quotes: “I never think of the future, it comes soon enough.”

The city will be heaving with events, some taking on a spooky tone in the build-up to Halloween, and there’s plenty more to keep the kids entertained, such as the puppet-making workshop on Thursday, October 28th.