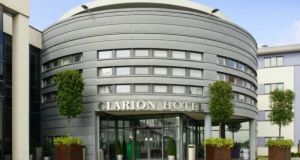 Dalata will now own and operate 257 bedrooms in the 352-room Clarion Liffey Valley hotel in Dublin.

Irish hotel group Dalata said on Monday it had acquired the long leasehold interest of 33 suites in the Clarion Hotel Liffey Valley in Dublin 22, bringing its goal of obtaining outright ownership of the hotel closer.

The listed hotel group acquired the property from US fund Colony Capital, and intends to rebrand it as a Clayton Hotel in the final quarter of this year.

It has now entered into an agreement with Martin Ferris as receiver to acquire a further 33 suites, the equivalent of 99 rooms, for a price of €8.58 million, in cash. It is expected that the transaction will close later this month.

Dalata deputy chief executive Dermot Crowley said: “We are delighted to acquire these additional bedrooms so quickly after the purchase of the core hotel and are very excited about the potential of the hotel under the Clayton brand.”

The move means Dalata will now own and operate 257 bedrooms in the 352-room hotel. The hotel operator is expected to try to secure agreement with about 50 individual investors who bought the remaining suites at the hotel, and are represented in discussions by property group CBRE.