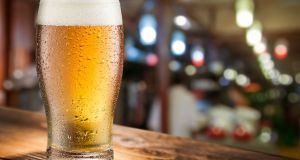 The drinks industry could be unduly affected by the loss of British tourists according to a report from DIGI. Photograph: iStock

The drop off in the number of British tourists travelling to Ireland could lead to a €70 million fall in revenue for the Irish economy.

According to a report commissioned by the Drinks Industry Group of Ireland (Digi), the decline in revenue from UK visitors has “serious ramifications for Ireland’s drinks industry”.

“Our tourism sector remains overly reliant on the UK, a market that is already contracting and set for years of economic uncertainty,” said Donal O’Keeffe, the chief executive of the Licensed Vintners Association.

The report, on the contribution of the drinks industry to Irish tourism, also found that tourists spend over a third of their holiday budget on food and drink with British tourists spending 40 per cent.

The group is using the results of the report as a platform to suggest that the Government should safeguard Ireland’s drinks industry by easing the tax burden on pubs.

“With the pub the tourist’s top draw, it makes sense that the Government properly safeguards this essential network of businesses by easing their tax burden, allowing them to become more price competitive and increase their earning potential,” Mr O’Keeffe said.

The report said the tax regime, coupled with a drop in the value of sterling, will “undercut Ireland’s tourism competitiveness”.

The drinks industry generates €2.3 billion for the exchequer each year and employs 92,000 people in Ireland, according to the report.