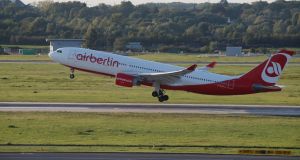 Bankrupt German airline Air Berlin has said its existence has been threatened by an apparent wildcat strike by staff, after 200 of its pilots called in sick at short notice on Tuesday.

The ailing carrier was forced to cancel more than 100 flights, including transatlantic connections, as a result of the sick notices, causing chaos at several German airports.

The airline’s chief executive, Thomas Winkelmann, accused pilots of “playing with fire”, as the cancelled flights would cost the company several million euro, making it less attractive to potential buyers.

“A stable operation is an essential precondition for successful negotiations,” Mr Winkelmann said. “This is the only way we can protect as many jobs as possible.”

German media reported that the airline is in a dispute with pilots about the transfer of staff to a new owner.

Air Berlin declared bankruptcy last month following years of losses and the decision of its biggest shareholder, Gulf airline Etihad, to cease payments. Bids to take over Air Berlin must be submitted by Friday.