Irish tourism industry only a Trump tantrum away from disaster

If US ends up entering yet another war, its big-spending tourists will stay at home

U.S. President Donald Trump has said that North Korea 'will be met with fire and fury like the world has never seen' if it threatened the United States again. 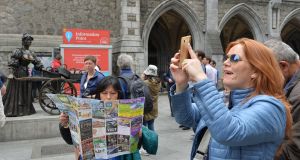 Tourists in Dublin at the Molly Malone statue. US visitor numbers to the Republic have risen by more than 50 per cent since 2013. Photograph: Photograph: Alan Betson

It’s all very well to say that growing numbers of US tourists to Ireland will make up for the Brexit-fuelled decline in UK visitor numbers. The latter are down 6 per cent so far this year while North American visitor numbers were up by a fifth to 1.8 million in 2016.

That would all change in a heartbeat if the United States ends up entering yet another armed conflict. When the US goes to war, its tourists always stay home. And given current geopolitical tensions, it’s not exactly an outlandish prospect.

The US last entered long-running wars in Afghanistan in 2001 and Iraq in 2003. Historically, they are due a good old-fashioned knock. If President Donald Trump keeps throwing ill-advised shapes over North Korea, they may soon get it.

Trump is not exactly a paragon of restraint. And a war might become an attractive prospect for him to redefine his presidency, if his tenure slides further into a farcical morass.

What would happen to Irish tourism if Trump were to lead the US into the unthinkable, which, with him in charge, is actually the quite thinkable indeed?

Whatever economic ill effects it had in Ireland would be nothing, obviously, compared with the human devastation of a war zone. But it is still worth thinking about as the tourism industry sits around complacently codding itself that a clear and present danger from the decline in British visitors doesn’t actually exist, when it is, in fact, staring us in the face.

In the early summer of 2001, I was nearing the end of the fourth year of a business and tourism degree. Off we went to Westport one day on a jolly, a class excursion to meet the business leaders of one of the best tourism towns on the west coast.

We gathered in a what was then a recently-built leisure centre. One by one, local hoteliers and restaurateurs stood up to describe how great things were. At the time, the debate over Ireland’s rapidly declining international competitiveness was beginning to rage. The cost of visiting here was increasing sharply, and there were fears it might dissuade UK and European visitors from coming to Ireland.

It doesn’t matter, the Westport tourism operators told us. Sure, haven’t we a queue of Americans halfway across the Atlantic looking to come here, and they will replace any lost business. Anyway, US tourists spend more per head than the British and Europeans, they said, and it might even be a good thing for Westport to go upmarket.

Something kept niggling me, so I stuck up my hand. But what will you do if the US tourists stop coming, I asked the Westport operators. The main guy looked at me like I had a fairy tree growing out of the back of my head.

Why on earth would they stop coming, said he. Not being a soothsayer, I had no comeback and so murmured some non-response, while he continued to describe the untold riches coming down the track for Westport on the back of this US invasion.

In 2000, US visitor numbers to Ireland stood at a then-record level, of 960,000. Overnight, after 9/11, that flow dried up, crippling parts of the Irish tourism industry.

I was by then working in the newly-built, five-star, US-operated Westin hotel in Dublin, which officially opened 10 days before the attacks. The hotel was barely a fortnight old, and already it was scrambling around for a cost-cutting programme.

Immediately following 9/11, US visitor numbers to Ireland fell by a fifth. The numbers didn’t recover again until 2006, and they fell again soon afterwards when the world’s financial system blew up.

The point is this: there is always some unpredictable mother lode of bother around the corner for the tourism industry. The sector is among the most elastic parts of the economy, and is the first to be hit when negative economic forces strike.

Dublin and the southwest in particular are heavily exposed to US tourism, with hotels in those areas deriving 18 per cent and 16 per cent of their business respectively from US visitors, according to the latest Crowe Horwath study. That’s more than double the exposure of the rest of the State.

US visitor numbers to the Republic have risen by more than 50 per cent since 2013. But that impressive growth is as much down to the backside falling out of the euro after the financial crisis than as it is to any structural change in the market.

Now, the backside has fallen out of sterling, presenting a challenge for the Irish tourism market. Ireland is instantly more expensive for its biggest source market, Britain, which is now a cheaper competitor for Ireland when it comes to attracting visitors from the most lucrative market, the US.

Part of the reason why Ireland is managing to hold off British competition for transatlantic tourism so stoutly is that many US visitors have a fear of terrorism in the UK. Further evidence that US tourists are notoriously skittish.

Ireland is only one US war – or one major incident of terrorism at home – away from a totally different story for the nation’s tourism industry.

– Another little nugget in the Crowe Horwath hotels survey concerns the increasingly negative sentiment among hoteliers in relation to wedding bookings.

Only a fifth of Irish hoteliers expect their revenues from weddings to increase over the coming year, with eight out of 10 expecting it to remain the same or even drop. It is the part of the hotel market where sentiment is by far the most negative.

How can this be? The economy is booming again and, after the 2015 vote to extend marriage rights to same-sex couple, sure hasn’t the potential market increased by 10 per cent overnight?

Crowe Horwath says hotels are coming under increasing pressure from non-traditional wedding venues. One colleague of ours recently attended a weekend-long wedding at a youth hostel in one of the most scenic parts of the eastern seaboard. Another pair of colleagues last year got married at an urban farm.

A church wedding, followed by a bash in the local hotel function room with beef or salmon and a bar extension, is no longer an automatic choice.

– Heystaks Technologies, the UCD mobile technology spinout backed to the tune of €1.5 million by Denis O’Brien’s Digicel, banked losses of about €700,000 last year, with accumulated losses at just over €2.6 million, according to accounts just filed.

The company is at early stage, however, and heavy losses are usually the order of the day for start-ups. It is also heavily fancied, with backing from a number of large venture capital funds, as well as from the State via Enterprise Ireland.

Heystaks has developed technology to monitor the behaviour of mobile phone users. As is common with many O’Brien-backed companies, it has built up strong relationships with other parts of the businessman’s empire. Independent News & Media, for example, where O’Brien is the main shareholder, uses Heystaks to mine data for advertisers.

1 Ryanair wants Irish courts to block Skyscanner from selling its flights
2 Are there annual limits on inheritances or gifts to a child?
3 Who are Ireland’s 17 billionaires?
4 How to . . . move (almost) everything to your new phone
5 Phil Hogan says EU ready to do ‘ambitious’ UK trade deal
6 Cathay Pacific to resume Dublin-Hong Kong flights in March
7 Start-up makes breakthrough in treatment for chronic venous disease
8 Apple’s cash mountain, how it avoids tax, and the Irish link
9 Ireland has EU’s most progressive tax system, study finds
10 Tipperary land holding of 800 acres seeking €11m
Real news has value SUBSCRIBE