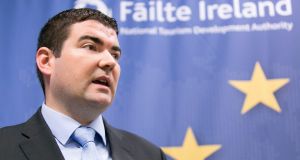 Minister of State for Tourism Brendan Griffin: Brexit should “not be a reason to give up on the UK” market. Photograph: Chris Bellew/Fennells

Fáilte Ireland, the State tourism authority, plans to fight to stem the decline in British tourist numbers to Ireland.

It has also launched a “Get Brexit Ready” programme to help tourism businesses deal with the effects of falling visitor numbers from Britain, due to its vote to exit the European Union.

Visitor numbers from the UK account for more than 40 per cent of inbound tourists, but are down 6 per cent this year. Fáilte Ireland estimates this will cost the industry at least €88 million by the end of 2017.

British visitors account for more than 60 per cent of visitors to some border areas, such as Monaghan or Leitrim. Fáilte Ireland is especially targeting the Brexit initiative at the heavily exposed east, southwest and border regions, where it says UK visitors bring in €1 billion of business.

The Get Brexit Ready programme comprises a website (getbrexitready.com) which contains a self-assessment tool and survey for businesses, to help them ascertain how prepared they are for Brexit.

The tool assesses the readiness of businesses around themes including their exposure to the British market and ability to shore up this business, their ability to diversify, and their staffing capabilities.

Get Brexit Ready will also include a nationwide series of workshops and local Brexit-themed initiatives in the coming months.

The programme was launched on Tuesday by Brendan Griffin, Minister of State for Tourism, who insisted that Brexit should “not be a reason to give up on the UK” market.

Paul Kelly, Fáilte Ireland’s chief executive, said that not only is Brexit crimping UK visitor numbers to Ireland, but the fall in sterling has also made it a sharper competitor for Ireland when targeting business from the US and elsewhere in Europe.

Mr Kelly said Fáilte Ireland hoped to directly engage with up to 1,000 businesses via its workshops by the end of the year.

He acknowledged that the performance of the US tourist market, which is up by about a fifth, was a “saving grace” for the industry in the face of Brexit.

Fáilte Ireland said it would fight to retain British tourism business for Ireland, such as the significant numbers of UK golf tourists who visit Ireland. It is also trying to encourage inbound UK tour operators to open up new itineraries in Ireland.

To reduce exposure to the UK market, Mr Kelly said the tourism authority is also engaged in a programme to target more Chinese visitors, along with the foreign marketing agency Tourism Ireland and officials in the north.

Meanwhile, Mr Griffin gave the strongest indication yet that the Government will retain the special 9 per cent tourism VAT rate in the upcoming budget.

“I say it is doing its job. I think it has a major role to play,” he said.

Trade unions have called for the tax subsidy to be scrapped, estimating it could generate €600 million for the State.

Mr Griffin also said he was pushing his Government colleagues to restore the marketing budgets of the State tourism agencies, which were cut by up to €20 million during the last financial crisis.