Ireland’s first floating boardwalk has opened at Acres Lake in Drumshanbo. The 600m walkway is the final link in a section of the Shannon Blueway, a 200km network of activity trails on interconnected waterways Leitrim, Roscommon, Longford and Cavan. 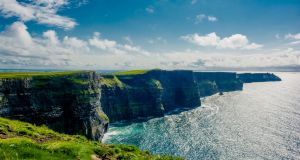 The tourism industry wants the State to spend €60m each year for a decade on developing new visitor attractions such as interpretative centres. Photograph: iStock

The Irish tourism industry wants the State to spend €60 million each year for a decade on developing new visitor attractions.

The Irish Tourist Industry Confederation (Itic) wants Minister for Finance Paschal Donohoe to commit to the capital expenditure boost in next month’s budget.

As part of its pre-budget submission the confederation wants an allocation of €60 million annually for tourism attractions – such as interpretative centres – over the 10-year period of the State’s Capital Plan, which runs from 2019 to 2028.

“The current allocation of only €106 million over a six-year period is wholly inadequate for tourism’s needs,” it said.

The group noted that this was just 0.4 per cent of the State’s capital budget.

It is also predicting that Brexit will cost the Irish tourism industry €100 million in 2017 due to declining numbers of British visitors and greater price competition from the UK’s industry.

It said the worst-affected Irish tourism regions as a result of Brexit would be Dublin, the Border regions and the southeast. About 130,000 less British visitors came to Ireland in the first seven months of the year compared to the same period last year.

The confederation has also again called for €20 million in the budget for State agencies Tourism Ireland and Fáilte Ireland to restore cuts made to their marketing budgets during the financial crisis.

Maurice Pratt, the confederation’s chairman, said tourism had “not got its fair share” of State capital expenditure.

Earlier this year the group said that tourism, which employs almost 230,000 people, was neglected by policymakers compared to other industries such as agriculture.

When asked if it had detected any improvement in the Government’s attitude to the industry, Eoghan O’Mara Walsh, the confederation’s chief executive, said: “We’ll see on budget day.”

The group has also renewed its call for the retention of the special 9 per cent VAT rate for the industry.