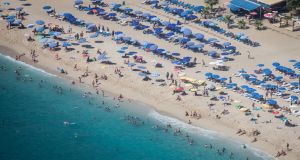 Industry figures warn such a move will drive up the cost of sun holidays. Photograph: Chris McGrath/Getty Images

Regulators want tour operators and travel agents to increase their contributions to a fund used to compensate consumers for failures such as Lowcostholidays.

Industry figures warn such a move will drive up the cost of sun holidays.

The Commission for Aviation Regulation (CAR), which oversees travel agents and tour operators, wants to top up its depleted Travellers’ Protection Fund.

Payments such as the €3.5 million given to Irish people stranded by last year’s collapse of Lowcostholidays have cut the amount in the fund from a high of €7.5 million in 2007/08 to €1.8 million.

The CAR, led by commissioner Cathy Mannion, fears it will not have enough cash to cover the cost of another similar failure and it has been in talks with the travel industry about increasing contributions to replenish the fund.

Industry groups have already warned that increases in their contributions could hit smaller operators and will also make sun holidays more expensive, as the extra costs will be passed on to consumers.

People who book holidays through agents and tour operators are already paying up to €5 extra each to cover bonding and other regulatory costs, the sector says.

Dominic Burke, managing director of Travel Centres, a consortium of travel agents that accounts for one third of the trade in the Republic, warned that the higher levy could damage the sector without dealing with the underlying problem.

“I have no doubt that it will put a lot of smaller companies out of business and still will not address the actual issues,” he said.

“Travel agents and tour operators have no problem being regulated, nor with paying proportionately necessary bonds, but this just ignores the real problem.”

Mr Burke pointed out that only about 15 per cent of holidaymakers leaving the Republic book through travel agents and tour operators.

Many of the other 85 per cent go direct to airlines , such as Ryanair or Aer Lingus, through whose sites they can also book accommodation and other services.

Holidaymakers also use websites that are owned by companies in one location outside the Republic and operated in another.

“The legislation that we have cannot factor in all those different, exotic scenarios,” Mr Burke said.

He said the current law actually dates back to another high-profile failure, that of Bray Travel in 1982, and is no longer fit for purpose.

The current system should be replaced by a small charge levied on every traveller leaving the Republic, either by air or sea, Mr Burke argued. That could be used to build up a new compensation fund.

Pat Dawson, chief executive of the Irish Travel Agents’ Association, recently advocated a similar measure. He said any additional charge would not need to be levied indefinitely but only until the Travellers’ Protection Fund was deemed to have enough cash to cover any likely demands on it.

The regulator says that it wants to ensure that the those booking holidays through travel agents and tour operators will have the same level of protection that they have always had.