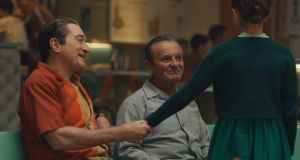 At a bowling alley, Frank Sheeran (Robert De Niro) attempts a show of warmth to his daughter Peggy (Lucy Gallina) in front of Russell Bufalino (Joe Pesci) in The Irishman. © 2019 Netlfix US, LLC.

The chief executive of Cineworld has accused Netflix of leaving Martin Scorsese’s The Irishman with “meaningless” box office income after releasing the film in cinemas for only a short period before streaming it.

Mooky Greidinger, who heads the world’s second-largest cinema group, said the US streaming service, which financed the Oscar-winning director’s film, had prevented it from becoming a box-office hit. Netflix put The Irishman out in cinemas on November 1st in the US and November 8th in Britain and Ireland, then streamed it from November 27th.

“The Irishman lost a lot of box office. A Scorsese released properly in cinemas would have generated a nice income,” he said.

Mr Greidinger’s accusation highlights a long-running stand-off between cinema owners and Netflix. Since September, Netflix has released 10 films in cinemas but few for more than a week before they are uploaded to its platform. In November, it announced it was buying the Paris Theater in New York and was in negotiations for the Egyptian in Los Angeles, where it plans to hold screenings and special events.

Netflix said all the major cinema companies were offered its films. Many, including Vue, Odeon and Cineworld, declined to show them, deeming the release window too short.

This month UK-based Cineworld announced a $2.1 billion (€1.9 billion) acquisition of the 165-strong Canadian cinema chain Cineplex, just 18 months after it completed a $3.6 billion reverse takeover of US cinema group Regal.

The deals form part of a wider consolidation across the film industry as streaming services such as Netflix increase film production.

Jeff Bock, senior box office analyst at research firm Exhibitor Relations, said cinemas and streaming platforms were lining up for a “war of the eyeballs”.

“We are talking about cinema versus streaming and it’s happening right now. Pulling all of that talent towards streaming is a huge deal for cinemas,” he said.

He added that audiences were tired of “lazy sequels” and that in order for cinema to thrive, studios needed to up their game.

According to the Motion Picture Association of America, global box office revenues for 2018 were $41.1 billion, up 1 per cent on 2017. Spending on TV and film at home increased 16 per cent to $55.7 billion.

Mr Greidinger said: “[THE IRISHMAN] was released in a very small number of cinemas worldwide, cinemas that do not care about keeping the window between the theatrical release and the auxiliary market release and the movie did nothing at the end of the day. People can see it in on Netflix and that’s it.”

Netflix said Mr Scorsese’s film was shown in 35 countries and that some cinemas showing it were taking bookings for screenings in February next year. More than 26m people watched The Irishman in its first week on Netflix’s platform.

Cinema executives have blamed an uneven film slate for poor sales in 2019. While films such as Avengers: Endgame broke box office records, other films that were expected to do well such as Men In Black: International and Dark Phoenix, the X-Men film, flopped.

In its latest trading update, Cineworld said revenues for the full year would be below expectations because of weaker box-office sales.

Mr Greidinger said that while cinemas could not control the films on offer, Cineworld had undertaken an extensive refurbishment programme in order to keep customers coming. It spent $90 million in the first six months of 2019 on upgrades to screen technology including 13 4DX screens, which have simulated smells and weather effects as well as vibrating seats.

Analysts at Morgan Stanley said the deal, which was financed with $2.3 billion of bank debt, was a “defensive” move that would leave the company with a net debt of 3.7 times earnings before interest, tax, depreciation and amortisation at the end of 2021. Cineworld is targeting net debt of less than three times adjusted earnings by the same deadline.

In an op-ed in The New York Times, Mr Scorsese wrote that he would have preferred for his film to play for longer in cinemas but that they were too crowded with franchise films.

“You might argue, can’t they just go home and watch anything else they want on Netflix or iTunes or Hulu? Sure - anywhere but on the big screen, where the film-maker intended her or his picture to be seen,” he wrote.