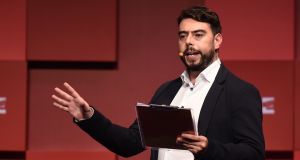 James McCann: “My view is that you should spread your risk geographically so that you haven’t got all your eggs in one kind of market or the other”

Clearstory International is a PR agency specialising in services to early-stage tech start-ups. It is based in Dublin.

It was quite a surprise. ClearStory hadn’t quite started at that stage. It was still at conception point, but it definitely changed my thinking about the relationship with the UK itself in terms of business development and direction.

I think most Irish companies, tech companies especially, would always have the UK in their growth plans, so I suppose, as we were starting off, we just had to factor that in.

When we started, given the uncertainty around Brexit, we just decided to skip past the UK for now and we looked at other markets such as southeast Asia, mainland Europe and even the Nordics. That’s not to say we haven’t got UK clients, we do, but they’ve been sourced passively and they are very worried about Brexit, and the impact it will have on them, even travel in and out of the EU.

When did you begin preparing for Brexit, and what contingency plans have you put in place so far?

We’ve decided to just wait for a post-Brexit scenario to tackle the UK. Here in Ireland our contingency planning has really been centred around identifying what companies or clients might be overexposed to it in the future because, obviously, it’s going to have potential knock-on effects. It’s not just the direct impact of Brexit, but all the other indirect, unseen scenarios. Going through what that potential impact could be in the long term for you and your company.

Are you examining new markets and suppliers? And if so how practical is that?

We’re in the service sector, which isn’t going to be massively impacted. I feel sorry for the agrifood guys and the farmers, I think they’re going to feel the full impact of this.

From our perspective we started off international first by working with companies across the globe. The reason for that is some of my early career was spent working in insurance, in the finance sector, when the crash happened. My view is that you should spread your risk geographically so that you haven’t got all your eggs in one kind of market or the other, so that’s been our approach from day one. Our client book is spread over three continents. It’s just making sure that we have enough of a diverse geographical range of clients. That if something bad happens in one area of the world, we can make up for it in another.

Yes, I think it genuinely does. First and foremost, Ireland is now going to be the only English-speaking country in the European Union. I think internationally-focused PR agencies will definitely see a lot more opportunity in some of the key markets like France and Germany, who were looking to get out into the English-speaking world. I think it’ll help rebalance the industry, and give Dublin-based firms a bit of an edge that wouldn’t have come about otherwise.

When do you expect to be Brexit ready?

I think we are largely ready now. What we’re waiting to see is what way the chips fall in terms of how bad this could potentially be for the UK, or will it be a more of a moderate effect?

What would your best/worst case scenario be?

If there is a deal, it means I could go back into the UK market straight away and start signing clients from there under the knowledge that there’s going to be stability.If we are looking at chaos, we’re a growing company, we don’t want any part of that.

How might the Irish or British governments, or the European Union, help ease the pain of Brexit for your company’s sector?

I think when it comes to service-related businesses, there’s very little or no information out there about, you know, potential impacts. It would be nice to know if there are any elements like travel, VAT issues or finance issues, anything along those lines. That needs to be communicated to the service sector as a whole. There’s very little clarity around it, so that would be appreciated.

How do you think the Irish or British governments have handled the Brexit negotiations?

I think the European Union have been pretty solid on the fact that they’re not changing course, and the Irish Government have been very solid on the fact that the backstop is needed, understandably. And on the British side you have absolute pandemonium. You have two opposite sides both accusing each other of undemocratic measures, and none of which points to a solution in the short term.

Looking out five years, how do you think that your business or industry will have changed as a result of Brexit?

I think there will be more firms moving from the UK to Ireland that will need more PR work. That’s obviously a potential benefit. For any of the PR agencies that are internationally-positioned there will be a lot more opportunity in European markets, which I think should be seized on.