Commercialising Christmas has a long and complicated history

Stores were opening till midnight back in 1867 and, even now, too often we just buy unwanted junk 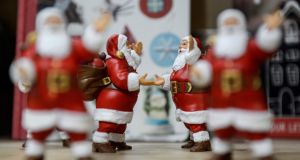 There are those who will have you believe that Santa Claus wears red and white in honour of the colours of the Coca-Cola brand. This is nonsense. The great man was seen clad in red and white some years before Haddon Sundblom’s iconic 1930s advertisements. What’s more, he was endorsing another soft drink, White Rock, while he did it.

Santa was not dreamt up by the marketing men. Rudolph the red-nosed reindeer, on the other hand, was. He was invented in 1939 so that Montgomery Ward stores could give away millions of copies of his heart-warming story.

Retailers have been using Christmas to prod us to spend money for a long time. Not that we need them, to have a party. Blowout winter feasting predates Christianity itself, and the puritans tried desperately to stop it. They made Christmas a day of penance instead; Oliver Cromwell’s Parliament made a point of sitting on Christmas Day, while puritan town criers would yell, “No Christmas! No Christmas!” on Christmas Eve, just in case anyone was planning to enjoy themselves. In Massachusetts in the 1660s and 1670s, Christmas was simply illegal.

But when did the folk tradition of feasting give way to an “only 11 shopping days left” retail experience?

The instinctive response is that the commercial Christmas has been something that has grown steadily over time, possibly since the middle of the 20th century. The truth is more interesting.

Stephen Nissenbaum, author of The Battle for Christmas, points out that a crucial shift happened when the festival became a domestic occasion, rather than the anarchic street revels the puritans were so desperate to suppress.

When Clement Clarke Moore penned the line, “’Twas the night before Christmas”, nearly 200 years ago, Christmas Eve in his home town of New York was pandemonium - the streets patrolled by noisy gangs of yobs. Moore wanted to evoke a quiet stay-at-home family Christmas with not a creature stirring, not even a mouse.

And of course, once Christmas became a family affair, traditional wassailing gifts of food and drink made less sense: people began exchanging shop-bought presents instead.

The commercialism of the Coca-Cola Santa and the Montgomery Ward Rudolph, then, built on a retail revolution of the early to mid-19th century. Advertisements for Christmas presents appeared in the US in the 1820s, and Santa Claus himself was wholeheartedly endorsing products by the 1840s.

In 1867, Macy’s store in Manhattan accommodated last-minute shopping by opening until midnight on Christmas Eve. That was the same year Charles Dickens read A Christmas Carol to thousands of people in Boston, the keeping of Christmas no longer being punishable in Massachusetts by a five shilling fine. (Dickens’s fabulous tale is expansive on the theme of generosity and, when you think about it, rather light on mentions of the baby Jesus.)

The backlash to the retail Christmas was quick to emerge.

“The days are close at hand when everybody gives away something to somebody,” complained one letter published in a Boston magazine in 1834, adding, “I . . . am amazed at the cunning skill with which the most worthless as well as most valuable articles are set forth to tempt and decoy the bewildered purchaser.”

It is a familiar sentiment, as is the author Harriet Beecher Stowe’s complaint, in 1850, that “there are worlds of money wasted, at this time of year, in getting things that nobody wants and nobody cares for after they are got”.

Economists (most prominently Joel Waldfogel, author of Scroogenomics) often make similar complaints. And while most people approve of Beecher Stowe’s concern, when faced with an actual retail experience, too often we buy junk. We’re too confident in our ability to choose the right gifts, we pay too much attention to fancy packaging and we don’t look at wishlists, even though the evidence suggests they’re a great way to buy a welcome gift without seeming crass.

We tell ourselves it’s the thought that counts, and then we often buy without thinking.

The good news is that Christmas commercialism is a smaller problem than many people think. Prof Waldfogel estimates the commercial scale of Christmas by comparing retail spending in December to the average of spending in November and January. That rough-and-ready measurement suggests that relative to the rest of the economy, Christmas has been getting smaller since the data series began in the 1930s.

For every hundred dollars spent across the year in the US, just 30 cents are attributable to Christmas retail spending. Our cars and our homes cost much more than gift-wrapped lingerie or a Lego set. Christmas spending may be wasteful, but at least the waste is contained.

This, it seems to me, is good news. There are many good reasons to give presents to the people we love, but poorly chosen presents are a genuine waste not just of “worlds of money”, but of time, energy and natural resources.

If it truly is the thought that counts, not the money, we should be grateful that Christmas spending looms smaller each year. Merry Christmas, one and all! – Copyright The Financial Times Limited 2019

1 Remote working doesn’t suit everyone, and it exposes woolly leadership
2 If you think governments are spending money now, just wait
3 Coronavirus: Construction sector most significant part of new shutdown
4 British exceptionalism backfires in style as Johnson tests positive for coronavirus
5 Dublin software company Workhuman ‘on course’ for €1bn valuation
6 Can husband keep savings and half the house in divorce?
7 Volkswagen burning through €2bn in cash per week
8 Will Covid-19 force Primark to rethink decision not to sell online?
9 Wetherspoon’s panto-villain chairman may have the last laugh
10 Pensions crisis in Europe
Real news has value SUBSCRIBE