‘Major’ production for Apple TV+ currently being filmed at Troy 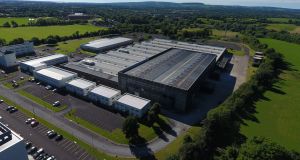 Troy Studios in Limerick has completed its fourth sound stage, making it the largest production studio facility in Ireland.

Troy said in a statement that it now has 32,516sq m (350,000sq ft) of space including stages and support infrastructure following a private investment of €13 million. It will also soon complete a specialist stage to cater for green screen and blue screen work measuring 427sq m (4,600sq ft).

Chief executive Siún Ní Raghallaigh said the company’s facilities are now “on a par with any in the world and will help attract new major film and TV projects to consider Ireland as a location now and into the future”.

Troy Studios is privately held and is backed by a number of investors including financier Joe Devine, whose Olcott Entertainment group acquired Ardmore Studios last year. Ms Ní Raghallaigh is also a shareholder of Troy, as is music industry veteran Osmond Kilkenny.

The Co Limerick facility is currently operating to capacity, with more than 500 staff employed there on a “major international production”. A drama series based on a sci-fi novel trilogy by Isaac Asimov, Foundation, is being filmed in Troy for tech giant Apple’s new streaming service, according to online film database IMDB.

English director Rupert Sanders, known for directing Snow White and the Huntsman, is directing the production being led by Skydance Television. Skydance previously produced Tom Clancy’s Jack Ryan, which aired on Amazon Prime, and Altered Carbon, which aired on Netflix.

Troy has previously facilitated production of US Syfy television series Nightflyers, produced by NBC Universal, and aired on Netflix, which was recently cancelled.

Aside from its sound stages, Troy has support buildings including workshops, props storage, costume, dressingrooms, production offices and hair and make-up rooms. There’s also a back lot of five acres available for exterior set construction.

This latest expansion, Ms Ní Raghallaigh said, will allow “up to twice as many employees work at Troy at any one time”.

“At a time when the global audiovisual industry is buoyant, this expanded facility places Ireland firmly on the global film and television map, increasing our potential to drive further sustainable economic benefits locally.”

1 Coronavirus: Construction sector most significant part of new shutdown
2 Wetherspoon’s panto-villain chairman may have the last laugh
3 British exceptionalism backfires in style as Johnson tests positive for coronavirus
4 Can husband keep savings and half the house in divorce?
5 Remote working doesn’t suit everyone, and it exposes woolly leadership
6 UK needs to be honest about its Covid-19 strategy
7 Retail landlords worried rents will dry up during Covid-19 crisis
8 Volkswagen burning through €2bn in cash per week
9 Mobile, broadband suppliers to be given extra radio spectrum
10 Rivian takes on Tesla with big batteries and subtler approach
Real news has value SUBSCRIBE