Across publishing and broadcasting, the industry is battling to adjust to the new screen order 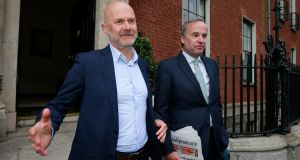 It was the year the Belgians came, saw and bought Ireland’s biggest newspaper empire faster than you could say the words “challenging transitional period”. The biggest Irish media drama of 2019 saw Independent News & Media (INM) cease to be a publicly-quoted stock that counted billionaire Denis O’Brien as its biggest and most notably litigious shareholder. Irish ownership of INM had reached its Waterloo.

By the summer, the ink had dried on the deal that saw it acquired for €145.6 million by Belgian group Mediahuis, which spotted the opportunity to snap up on the cheap a company with €80 million-plus in cash on its books.

O’Brien, having spent more than €500 million on his stake, agreed to sell for less than a tenth of that sum, ending an era that took in the ousting of INM’s one-time rulers in the O’Reilly family, various denied accusations of editorial interference and the alleged removal of data from the emails of INM journalists and others in Talbot Street.

The media group behind the Irish Independent, the Sunday Independent, the Herald, the Belfast Telegraph and other titles, now has a new team in charge, led by chief executive Marc Vangeel, chief operations officer Richard McClean and publisher Peter Vandermeersch, who in early 2020 will oversee INM’s belated launch of a digital paywall.

While scandals are conspicuous by their absence, some things haven’t changed. The cost-cutting that kicked off 2019 under the old regime continued under the new one, though the earmarking for closure of its printing plant at Citywest resembled that most ominous of things: a sign of the media times.

A National Union of Journalists (NUJ) chapel motion calling on Mediahuis to reinvest INM’s cash pile back into the company was dashed within weeks as the Belgian parent transferred up to €60 million back to its own books “for debt repayment or onward investment”. This business was integrating fast.

The Irish Times began 2019 bedding in the acquisition it made midway through the previous year of the Irish Examiner and other publishing and radio assets from Cork’s Landmark Media Investments. In July, the shareholder-free group, owned by a trust, announced it had made an operating profit of €2.61 million in 2018, up 5.2 per cent.

The Irish Examiner’s 127-year-old sister newspaper the Evening Echo rebranded to the Echo and became a morning title. It was not the only newspaper to change its name. In November, the Sunday Business Post marked its 30th anniversary by dropping the Sunday part of its title.

The Business Post’s owner of slightly more than a year, Galway businessman and round-the-world sailor Enda O’Coineen, declared he wanted to increase the Business Post’s digital subscriptions from less than 5,000 to a whopping 100,000. The author of a memoir, The Unsinkable Entrepreneur, who also snapped up a portfolio of magazines including Irish Tatler and Food & Wine from Irish Studio, has global ambitions for the digital Business Post, but says he believes in print.

“We’ll keep print,” he assured. In a year in which billionaire (and newspaper owner) Warren Buffett was declaring newspapers “toast”, such sentiments of support no longer go without saying.

Across news publishing, not far beneath whatever bullishness could be found, there were multiple puncture wounds. An industry trying to straddle print and digital – with each medium bringing its own challenges – could have done without the advertising market wobbles set in motion by ongoing Brexit uncertainty.

It certainly wasn’t the best of years for employment in Irish journalism. In May, most of the editorial staff at Times Ireland lost their jobs after its parent company, News Corp UK & Ireland, pulled the plug on its print edition. This came on top of a swathe of redundancies – some voluntary, some not so voluntary – at another UK news publisher, the company behind the Irish Daily Mail and Irish Mail on Sunday.

A rare new venture arrived in the autumn in the form of the Currency, a digital business news publication led by former (Sunday) Business Post editor Ian Kehoe and former executive editor Tom Lyons. Like their counterparts at The Irish Times, the Currency’s journalists promptly found themselves banned from radio stations owned by O’Brien’s Communicorp. No Newstalk or Today FM for them, and sadly no 98FM or Spin 1038 either. The ban was later rescinded, but the Currency said its people wouldn’t be going on those stations anyway.

The Currency was a “competitor platform”, Communicorp producers were advised. The National Union of Journalists, in a busy year for the union, noted that Kehoe and Lyons had a record of journalism that “has not always met with universal approval, including by individuals associated with Communicorp”.

The company behind the Business Post won a crucial defamation case taken by O’Brien in relation to articles published in 2015. In victory, the newspaper highlighted “unreasonable pressures” on news media and echoed much-repeated calls for reform of Irish defamation laws. The year ended with more evidence – courtesy of a case taken by life coach Tony Robbins against BuzzFeed – that the legal system is so stacked in favour of claimants, it has made Dublin something of a go-to city for libel tourism.

As for the long-promised Government review of defamation laws, it seems 2020 might just be the year. But, like a lot of things connected to news publishing, it would still be sensible not to hold your breath.

Few cared that Government hostility to the public service broadcaster jarred with its friendly statements of support – if not actually a great deal of financial backing – to the “nice” part of the screen industry that gets nominated for Oscars. Never mind that both parts of the business involve many of the same frustrated companies and much of the same opportunity-starved talent.

Amid erratic advertising trends, an eventful decade for Irish broadcasting ended with a year of faltering morale. It was quietly faltering for the most part, though not so at RTÉ, where a shower of boos rained upon management as it tried in vain to make staff feel better about imminent cutbacks.

After director-general Dee Forbes had her Budget 2020 hopes dashed, internal rows broke out, campaigns were waged and Christmas was very nearly cancelled. The Government eventually managed to locate a €10 million injection of public funding after all.

More policy reviews and debates are back on the schedule, though the key issue has scarcely changed: antiquated rules on eligibility to pay the television licence fee coupled with a high evasion rate mean a critical source of money that once sustained the sector is being lost down the back of the sofa. Television set? What television set? As the decade came to an end, it was all too plausible for homes to dispense with the “box” that was once part of the furniture.

Across publishing and broadcasting, the industry is still engaged in its struggle to adjust to the new screen order. Who can say what lies waiting down the line at the end of 2029? Whatever it looks like, it will make for a fascinating documentary... on Netflix.

“Well, Congresswoman, I think lying is bad, and I think if you were to run an ad that had a lie in it, that would be bad.”

– Mark Zuckerberg replies to Democratic representative Alexandria Ocasio-Cortez, who queried if he saw a problem with Facebook’s policy of not fact-checking political advertisements.

“I have every aspiration to sanity.”

– Enda O’Coineen assures RTÉ’s The Business that he wasn’t mad to buy the (Sunday) Business Post and invest money in it.

“I think too much of anything is not a good thing.”

“There are some shows that you just know you are never going to watch.”

– James Murdoch, son of Rupert, isn’t racing to catch HBO’s Succession, a drama about a fearsome media mogul and his offspring.

“It will no longer be possible to continue as we are.”

– Dee Forbes, RTÉ director-general, gives staff the bad news in an email sent as its autumn season of programming was about to get under way.

“It upsets the people in the newsroom to talk that way, but the adverts were the most important editorial content from the standpoint of the reader.”

– Billionaire newspaper proprietor Warren Buffett on how readers of US papers would buy them for their job and accommodation ads.

“The ad market is soft and it shouldn’t be soft… We are all busting our you-know-whats to deliver great radio.”

– Head of RTÉ 2fm Dan Healy speaks on behalf of the radio industry as it laments a subdued advertising market.

“They’ve bulldozed competition, used our private information for profit, and tilted the playing field against everyone else.”

– US senator and presidential hopeful Elizabeth Warren isn’t a fan of Big Tech.