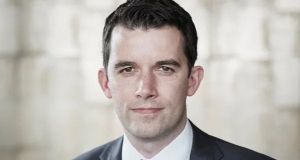 Mr Fitzpatrick (35) will replace Allan Prosser, who was appointed editor in July 2018, and who will retire in the New Year.

Mr Fitzpatrick, who will assume the role from January 1st next, is originally from Cork and began his career with the Evening Echo in 2007.

He joined Emap’s Construction News in London in 2011, where he was responsible for digital strategy.

Liam Kavanagh, managing director of the Irish Times Group, which acquired the Examiner Group in July 2018, welcomed Mr Fitzpatrick to his new role, and thanked Prosser for his work over the past 16 years.

“We would like to again thank Allan Prosser for his important contribution to the Irish Examiner and to the wider group,” Mr Kavanagh said.

“Allan has served in a variety of roles over a 16 year period and was appointed acting editor in 2016 and editor from July 2018.”

1 Knock gets visit from world’s largest passenger plane
2 Nineteen staff made redundant by Nama share €1m
3 Appeals board grants planning for 354 Greystones homes
4 Accumulated profit falls at Joe Duffy’s media company
5 Kingspan amasses €750m war chest to fund acquisitions
6 Why Sweden ditched its negative rate experiment
7 How do you know if you are wealthy? It’s not straightforward
8 A maverick taking on the Irish whiskey establishment
9 Barclays scraps system monitoring how long staff spent at desks
10 How can I view my dead brother’s will if I’m not the executor?
Real news has value SUBSCRIBE