US stocks heading for worst month since the financial crisis 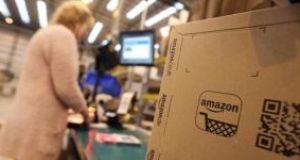 The US stock market tumbled into a correction territory on Friday after strong economic data failed to improve souring investor sentiment, with the S&P 500 index heading for its worst month since the financial crisis.

The US economy expanded at an annualised rate of 3.5 per cent in the third quarter, according to an initial reading from the commerce department on Friday, beating economist expectations on the back of strong consumer sentiment.

However, the data did not calm fraying nerves on Wall Street, where investors are concerned about rising interest rates, slowing global growth, international trade tensions and the possibility of corporate profit growth dimming in the coming year.

The latter fear has been exacerbated by the patchy third-quarter results of a handful of bellwether companies this week, such as Caterpillar, and disappointing outlooks from Amazon and Alphabet on Thursday evening.

That sent the S&P 500 down by as much as 2.9 per cent on Friday, once again wiping out the last of this year’s gains and taking the benchmark’s decline from its September 21st peak to over 10 per cent - the typical definition of a correction. The index was down 2.3 per cent by midday in New York.

Meanwhile, US tech stocks - which have been at the heart of the decade-long bull market - are on track for their worst month since the financial crisis.

A cautious outlook from Amazon for the holiday shopping season sent its shares down 8.4 per cent by midday trading in New York, its biggest one-day slump in over four years. Stock in Alphabet, Google’s parent, fell 3.8 per cent. Overall, the Nasdaq Composite fell 3 per cent.

After a stunning rally that saw the market value of Amazon and Apple, two of the biggest tech companies, vault past the $1 trillion (€0.9 trillion) mark earlier this year, investors have been exiting a trade that was widely seen as one of the most crowded on Wall Street. The Nasdaq, the index that is home to many US technology companies, has lost over 11 per cent in October, leaving it poised for its worst month since November 2008.

Tech stocks had now “begun to underperform, and we think there is more ahead,” strategists at Morgan Stanley noted.

The ending of an era of monetary stimulus from central banks has shifted the ground for investors who have become accustomed to seeing both bonds and equities rise. While third-quarter US earnings have so far exceeded expectations, investors are fearful that the backdrop will now become tougher for corporate America as the global economy slows and the effect of the US stimulus fades.