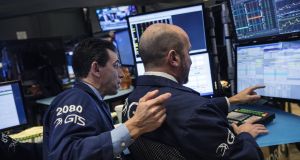 European stocks ended a choppy trading session broadly flat on Friday but managed to eke out a weekly gain despite mixed third-quarter earnings and as the budget row between Italy’s populist government and the European Union heated up. The pan-European Stoxx 600 dipped 0.06 per cent to end the week with a 0.7 per cent gain.

Italy’s bank stocks index sustained heavy losses in morning trading and fell to 22-month lows as government bonds were sold off after Brussels sent Rome a letter demanding an explanation for its budget plans. Italian banks gradually pared their losses and limited their daily retreat to 0.4 per cent.

The Iseq fell 1.5 per cent to 5,997, underperforming its European peers. Troubled food group Aryzta fell 5.5 per cent to €8 after three shareholder advisory firms came out in support of the company’s €800 million capital raise plan, which it says it needs to pay down debt and fund a major restructuring. The fundraising, which needs shareholder backing, is expected to dilute Aryzta’s earnings per share by about 25 per cent. Ryanair was down 1.4 per cent at €11.51 as another report warned of the likely chaos that might ensue if the UK crashes out of the EU next March. More than a third of all Irish air traffic could be grounded in the event of a no-deal Brexit, the Irish Aviation Authority said.

Bank of Ireland and AIB fell 1-1.5 per cent as European financials fretted over Italy’s upcoming budget and the likely impact on peripheral bond yields in Europe. Smurfit Kappa, meanwhile, fell 2.6 per cent to €28.10.

Britain’s top share index closed higher on Friday as a stronger US dollar boosted multinational stocks, higher oil prices lifted energy majors and investors sought safety in utilities and companies deemed less risky amid economic uncertainty. The gains helped offset weakness in property stocks and travel sector as weak earnings reports and broker downgrades deepened concerns about a slowdown in the sectors. After a choppy day’s trading the Ftse 100 clawed back earlier losses to close up 0.5 per cent as a strengthening US dollar boosted exporter stocks, which became the biggest weight on the index. The index rose 0.8 per cent on the week, recouping some of the ground lost in last week’s dramatic sell-off and outperforming European stocks.

Defensive, high-yielding stocks, including consumer staples and healthcare, also gained as investors grew more cautious after weak results from construction and auto companies, and as Brussels prepares for a showdown with Italy’s populist government over its budget. Oil majors BP and Shell climbed, Reckitt Benckiser topped the gainers with a 3.8 per cent for its best day in nearly three months, and GlaxoSmithKline jumped 3.1 per cent. With earnings season in full swing, however, investor sentiment has grown increasingly gloomy this week, with few examples to give much cheer.

A crop of results, some with negative outlooks, suggesting growth slowing in China cast a shadow on the session. Shares in tyre maker Michelin tumbled 11.2 per cent after it cut its sales outlook and downgraded its market growth forecasts, blaming slowing Chinese car demand and new emissions testing regulations. “Companies that disappoint are always more harshly punished but, given the trend in the market currently, reactions are stronger than usual,” said Emmanuel Cau, European equity strategist at Barclays.

Michelin’s German rival Continental fell 4.5 and the autos and parts sector as a whole sank 2.8 per cent. “This warning provides a negative read across to all tyre makers (weaker market volume and higher input costs),” said UBS analysts. French conglomerate Bouygues fell 11.8 per cent after cutting its profit outlook due to difficulties in its construction businesses, also reporting a shrinking margin due to problems with contracts and France’s rail strikes.

US stocks rose broadly on Friday, driven by the consumer staples sector, which was helped by Procter & Gamble results, brushing aside growth risk concerns in Europe and political tensions in Saudi Arabia. Consumer goods bellwether Procter & Gamble reported a surprise rise in first-quarter sales, sending its shares up 6.8 per cent and boosting the consumer staples index by 1.8 per cent. The sector, which has largely underperformed the broader S&P 500 this year, was set for its biggest daily gain since June 2016.

Among gainers on strong results was PayPal, which rose 9.2 per cent and was on track for its best daily gain in two years after the payments company beat quarterly profit estimates. Schlumberger rose 1 per cent as its third-quarter profit increased on higher oilfield services demand. Honeywell shares pared earlier gains to edge 1.7 per cent higher as the industrial conglomerate said it was seeing slower growth in China and that trade tariffs would squeeze margins and potentially cost it “hundreds of millions” of dollars in 2019. – Additional reporting by Reuters