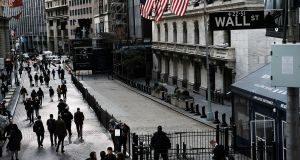 Wall Street sank on Tuesday, continuing a punishing month for US stocks, as dismal outlook from industrial bellwethers Caterpillar and 3M sparked concerns over corporate growth

European shares hit their weakest in nearly two years after a disappointing batch of third-quarter results, particularly in the tech sector, reignited the negative mood after last week’s respite.

Sentiment deteriorated after Wall Street opened lower amid a toxic mix of fears about the impact of the US-China trade dispute, geopolitical tensions and the strength of corporate results as peak earnings season arrives.

The Iseq index closed down almost 1.6 per cent on a tough day for equity markets across Europe and the US. Building materials group CRH was drawn into the plunge in sentiment, falling 2.4 per cent to €23.67.

On a day when most stocks were in the red, Ryanair provided some support for the market, adding 3.3 per cent to €12.38, building on Monday’s post-earnings gain of 4.2 per cent.

Swiss-Irish bakery group Aryzta, which finished down 4.4 per cent on its Dublin listing, issued a statement after the close of markets to say its board recommended that shareholders accept an €800 million equity-raising.

British shares sank to their lowest since March as a broad sell-off hit stocks across Europe, caused by a toxic mix of weak results, jitters over geopolitical tensions, Brexit, Italy’s budget and cooling markets overnight.

The FTSE 100, on track for its biggest monthly loss in a decade, closed down 1.24 per cent just below psychologically important 7,000 level. Mid-cap FTSE 250 closed down 2.2 per cent at its lowest since February 2017.

Risk aversion pervaded the market, with gold mining, tobacco and utility companies among the few gainers on the day.

Ocado, one of the best performing stocks so far this year, was the biggest faller, losing 9.7 per cent for its worst daily performance in more than two years.

GVC Holdings were the second biggest loser, down 7.1 per cent. Whitbread fell 1.5 per cent after the owner of Premier Inn hotels reported slower revenue growth in the first half amid growing economic and political uncertainty in Britain.

The pan-European Stoxx 600 benchmark index fell for its fifth straight day, ending down 1.6 per cent at its lowest level since December 2016, while Germany’s Dax lost 2.2 per cent, also reaching December 2016 lows.

Italy’s FTSE MIB dropped 0.9 per cent to lows last seen in February 2017 after the European Commission rejected the country’s draft budget and asked Rome to submit a new one within three weeks.

The European tech sector led sectoral fallers, shedding 3.7 per cent after downbeat updates from Apple chip supplier AMS and French IT services company Atos. AMS disappointed investors with its fourth-quarter forecast, knocking 26 per cent off its shares despite the Austrian firm winning deals with other smartphone makers. Atos fell 22 per cent after it cut its revenue growth forecast for 2018.

Sweden’s Saab fell 15 per cent after it announced a rights issue, while Germany’s Bayer dropped 9.5 per cent after a US judge affirmed a cancer liability verdict against its Monsanto unit.

Wall Street sank on Tuesday, continuing a punishing month for US stocks, as dismal outlook from industrial bellwethers Caterpillar and 3M sparked concerns over corporate growth.

Caterpillar tumbled 5.8 per cent, having traded 9 per cent lower earlier in the session, after the heavy-duty equipment maker maintained its 2018 earnings forecast, after having raised it in the previous two quarters.

The 3M conglomerate slid 5.2 per cent after cutting its full-year profit outlook due to currency headwinds. That reignited worries over the impact of rising borrowing costs, wages and tariffs on corporate profits and caused S&P industrial stocks to slide 2.24 per cent. – Additional reporting: Reuters / Bloomberg