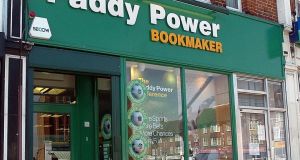 Paddy Power Betfair fell almost 3.9 per cent to €73.45. Several UK-exposed gambling companies were under pressure after the Financial Times reported that UK Chancellor Philip Hammond was set to increase taxes paid by offshore bookies in his budget later this month.

European shares fell at the end of a choppy trading session on Monday, as relief over Moody’s decision to keep Italy’s sovereign rating outlook stable proved short lived and the focus turned to Europe’s response to Rome’s budget plans. The Iseq in Dublin bucked the trend, however, up almost 0.5 per cent.

Britain’s blue-chip share index gave up earlier gains and slipped into negative territory as lower oil prices pressured energy stocks and gambling companies were knocked by a report of a UK crackdown on offshore taxes.

Paddy Power Betfair fell almost 3.9 per cent to €73.45. Several UK-exposed gambling companies were under pressure after the Financial Times reported that UK chancellor Philip Hammond was set to increase taxes paid by offshore bookies in his budget later this month.

Ryanair rose 4.2 per cent to close at €11.98, despite reporting a dip in profits. Chief executive Michael O’Leary predicted that its industrial relations difficulties could be resolved “this side of Christmas”.

Bulmers-Magners cidermaker C&C rose 2.4 per cent to €3.38, ahead of the release of its interim results on Thursday. Davy analysts on Monday predicted its core brands will “perform well” and that its recent acquisition, the drinks company Matthew Clark, will make a “modest contribution”.

The FTSE 100 closed down 0.10 per cent, as energy stocks knocked more than 12 points off the index. Oil services company Wood Group fell 2.8 per cent, the second-largest loser, and BP ended down 1.2 per cent.

UK mining companies were boosted by higher copper prices, with Anglo American up 1.6 per cent, amid hopes of stronger demand from China, the world’s top commodities market.

Lloyds Banking Group gaining 0.5 per cent after the Financial Times reported that the bank is planning to double its share buyback programme to almost £2 billion.

Across European equities, most sectors were trading in the red despite a broad-based bounce at the open, yet Fiat Chrysler rose 3 per cent after the Italo-American car maker agreed to sell its Magneti Marelli unit in a €6.2 billion.

Italian banks, heavily exposed to government bonds and hit hard by worries over Rome’s spending plans, rose 3.6 per cent at one point before turning negative to trade down 1.5 per cent. Italy told the European Commission on Monday it would stick to its 2019 budget plans in defiance of EU fiscal rules, but promised not to further inflate its deficit in coming years.

By the afternoon, gains in the high-growth stocks capped losses in the S&P and the Dow.

Amazon rose 1.7 per cent and Google-parent Alphabet gained 0.75 per cent. Both are due to report results later this week. Both Facebook and Apple gained about 1 per cent and are expected to report quarterly results next week.

Intel gained 1.2 per cent after Nomura upgraded the stock to “buy”. The energy sector fell 1.3 per cent after crude oil prices slipped below $80 a barrel as Saudi Arabia pledged to raise its crude production to a record.

Hasbro dropped 4.6 per cent after its quarterly results missed estimates, as the demise of major retail partner Toys ‘R’ Us hurt sales in the US and Europe. Mattel fell 1.2 per cent.