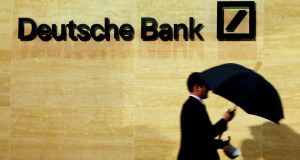 Deutsche Bank shares were down 4.8 per cent after a big drop in third-quarter profit. Photograph: Reuters

European shares fell on Wednesday for the sixth straight session as disappointing results from Deutsche Bank and chipmaker STMicro offered little excuse for investors to return from the sidelines.

The Iseq index in Dublin fell 0.2 per cent to 5,917.33, with banking stocks among the worst performers, in line with their peers across Europe as sector followers mulled weak Deutsche Bank figures and a sell-off among Italian lenders.

However, C&C rose by 2.1 per cent to €3.40, with Merrion Capital awarding the stock as a “buy” rating ahead of the group’s interim results on Thursday, saying it expected the drinks firm to report a 15 per cent increase in earnings per share.

Glenveagh rose 1.2 per cent to 85 cent and Cairn Homes added 1.3 per cent to €1.43 as investors took a view that the sector had been oversold in recent times.

UK shares ended well off highs but still managed to recover from the previous day’s seven-month lows, as a stronger US dollar boosted consumer goods makers.

The Ftse 100 was up just 0.1 per cent at the close after rising 1.3 per cent at one point during the session.

“The main problem is that overall sentiment is very negative,” said Markus Huber, trader at City of London Markets. “There is too much uncertainty out there in regard to a Brexit deal, possible trade wars, Italian budget, Turkey, disappointing earnings, Fed tightening too aggressively, just to name a few.”

Among the biggest gainers on the Ftse 100 were multinationals with less exposure to sterling, with Diageo and Reckitt Benckiser, up 0.7 per cent and 2.2 per cent, respectively.

The pound eased to seven-week lows ahead of UK prime minister Theresa May’s address to restive Conservative Party lawmakers on her Brexit strategy later in the day.

Luxury goods maker Burberry, up 0.1 per cent, was supported by a positive third-quarter report and rosy outlook on China, the world’s second-largest economy, from French luxury goods company and owner of the Gucci brand Kering.

Germany’s Dax ended the day down 0.7 per cent while Italy’s Ftse MIB fell 1.7 per cent, with Italian banks down 3.3 per cent as bonds sold off further.

The banking sector, overall the worst-performing in Europe so far this year, lost 1.4 per cent with Deutsche Bank shares down 4.8 per cent after a steep decline in third-quarter profit.

The tech sector slid 1.9 per cent with Franco-Italian chipmaker STMicroelectronics down 10.2 per cent after its third-quarter update slightly missed expectations.

Orion jumped 9.7 per cent after a study showing a prostate cancer drug it is jointly developing with Bayer can delay the spread of the disease to other parts of the body.

US stocks dropped in early afternoon trading as weak results from AT&T and sour outlook from chipmakers ahead of key earnings added to growing worries about corporate profit growth and overshadowed optimism from Boeing’s raised forecast.

Chipmakers, already struggling with oversupply and reliant on China for a significant portion of profit, dropped after Texas Instruments forecast weak current quarter and STMicro signalled slowing demand in China.

AT&T tumbled after the US wireless carrier’s quarterly profit rose less than expected, held back by its declining satellite TV business.

Boeing rose after the plane maker raised its full-year expectations.