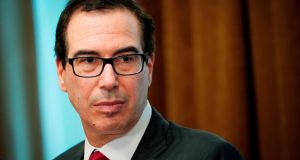 The markets hit session lows after US treasury secretary Steven Mnuchin (above) pulled out of a major investment conference in Saudi Arabia. Photograph: Mandel Ngan/AFP/Getty

European shares swung back into the red yesterday as fears of rising rates and disappointing earnings from US industrials dragged Wall Street down, while HeidelbergCement’s profit warning sank European construction stocks.

The Iseq finished the session more than 1.5 per cent behind, following poor performances from its heaviest stocks, especially CRH.

The building materials giant fell 4.2 per cent to close at €25.28, after the poor results from its peer HeidelbergCement soured sentiment on the sector. Analysts also expressed concern that CRH, which has significant US operations, would be affected if there is a slowdown in the US market on interest rate concerns.

Bank of Ireland fell 2.7 per cent to €6.25, reflecting negative sentiment in the financial sector across Europe.

The FTSE 100 gave up earlier gains to end the session down 0.3 per cent. The profit warning from German cement maker Heidelbergcement weighed on basic materials stocks. Ashtead Group was down 3.4 per cent.

The biggest boost was the healthcare sector, with UK-listed drugmakers buoyed after Switzerland’s Novartis raised its 2018 revenue forecast and announced a $2.1 billion acquisition of nuclear medicine specialist Endocyte. GlaxoSmithKline was up 1.1 per cent and Shire climbed 1.3 per cent.

The euro zone’s leading stocks index attempted a recovery but finished the day down 1 per cent while the pan-European Stoxx 600 index slipped 0.5 per cent and Germany’s Dax slid 1.1 per cent.

French supermarket operator Carrefour jumped up 9.3 per cent as it reported a sales growth acceleration in France and Brazil outweighing weakness in southern Europe.

Tech was the worst-performing European sector, down 2.1 per cent, with banks down 1.7 per cent as investors shed stocks most sensitive to the economic cycle.

Spanish banks Banco Sabadell, Bankinter, Bankia, Caixabank, BBVA, and Santander all fell between 2 and 6.7 per cent after the supreme court ruled banks must pay stamp duty on mortgage loans.

The biggest earnings disappointment was HeidelbergCement, one of the world’s largest cement makers, which fell 8.6 per cent after it cut its profit guidance for 2018, citing bad weather in the US and higher-than-expected energy cost inflation.

US stocks fell more than 1 per cent as the European Commission issued a warning regarding Italy’s budget and concerns mounted over the possibility of strained relations between the US and Saudi Arabia, further denting investors’ appetite for risk amid global trade tensions and rising interest rates.

Bucking the trend was Philip Morris, whose shares rose 3.5 per cent after the Marlboro cigarette maker topped analysts’ estimates for quarterly profit and sales.