Market report: One of the biggest comebacks in the choppy session was by struggling department store chain Debenhams 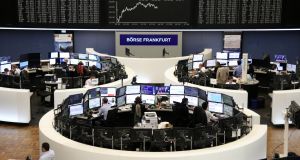 European shares ended in positive territory, breaking a six-day losing streak, after a tentative recovery was lent support in the afternoon by a rally on Wall Street

European shares ended in positive territory, breaking a six-day losing streak, after a tentative recovery was lent support in the afternoon by a rally on Wall Street.

The US market delivered a strong comeback after heavy losses on Wednesday when the tech-heavy Nasdaq had its worst day since 2011.

Meanwhile, the European Central Bank on Thursday stuck to its plan to roll back its unprecedented stimulus measures, even as the growth outlook continues to darken.

The Iseq climbed 0.9 per cent in line with the positive performance across Europe, with a number of key stocks making decent gains.

Drinks group C&C added 0.6 per cent to €3.42 after it published earnings that beat forecasts and indicated that summer weather and the World Cup helped lift sales of its products in the first half of its fiscal year.

Food group Kerry nudged up 0.2 per cent to €91.70 after it acquired two companies, Fleischmann’s Vinegar Company, based in California, and Oman-headquartered AATCO Food Industries.

One of the biggest comebacks in the choppy session was by struggling department store chain Debenhams. Its shares touched a new low of 8 pence after it reported a full-year loss and outlined plans to shut stores, but it eventually closed up 9 per cent on the day.

Lloyds Bank was also in demand, rising 1.9 per cent and tracking strength across the European banking sector, after the British lender posted a higher-than-expected profit for the third quarter.

Investors punished WPP which lost as much as 23 per cent after a major downturn at its creative agencies in New York and London forced it to cut its sales and profit forecasts, ramping up the pressure on new boss Mark Read. The advertising group pared some of its losses and closed down 14 per cent.

Drugmakers were heavy fallers, with AstraZeneca and Shire down 2 per cent and 1.3 per cent respectively.

In Germany, the Dax hit a near two-year low early in the session, but recovered to finish up 1 per cent, while the French Cac 40 eventually closed up 1.6 per cent.

AB InBev shares tumbled 10.4 per cent after the Belgian brewing giant halved its dividend due to volatility in emerging markets.

Auto stocks rose 3.1 per cent with Peugeot topping the CAC 40, up 7 per cent. Kion jumped 13 per cent after the German logistics company reported strong order intake.

Gains for tech shares pushed US benchmark indexes back into positive territory in the wake of Wednesday’s rout that had wiped out this year’s gains.

Strong earnings results from Twitter, Microsoft and Tesla helped push the S&P 500 Index higher for the first time in seven days. Intel, Amazon and Alphabet all report after the close.

Twitter surged more than 15 per cent after third-quarter earnings and revenue exceeded estimates thanks to better-than-expected spending by advertisers on the platform.

Microsoft rose more than 5 per cent, while Tesla was up more than 7 per cent. – Additional reporting: Reuters/Bloomberg

Ryanair adds to Boeing order, Irish whiskey preps for rebound, and why we should listen to dissenting voices 07:01
Lend an ear to dissenters and sceptics who fear consensus 05:44
Tourism needs to shift to ‘a more ethical model’ 05:35
Covid taking a toll on companies’ reservoir of workplace knowledge 05:30
Randox to open Covid testing lab in Co Donegal 05:30