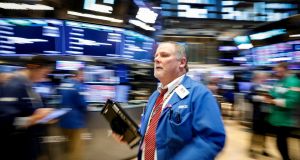 Traders work on the floor of the New York Stock Exchange. US shares were lower in mid-afternoon trading in all-round choppy session on Wednesday. Photograph: Brendan McDermid/Reuters

European shares fell on Wednesday, as markets globally were rattled by weaker-than-expected quarterly sales from technology giant IBM as well as fears that slowing economic growth in China could hit carmakers’ earnings.

Sentiment was also dented by concerns over whether there would be enough progress on Brexit negotiations for a special European Union summit to go ahead next month.

The pan-European Stoxx 600 index dropped 0.4 per cent to 363.54, a day after European shares had racked up their best daily advance since early April.

The Iseq index of Irish shares dropped 1.2 per cent to 6,188.02, with cider and beer group C&C, which is heavily exposed to sterling movements, leading larger companies in Dublin lower.

Kerry Group declined by 2.6 per cent to €91.60, after French food giant Danone reported a drop in quarterly sales.

Ryanair dropped almost 1.5 per cent to €11.58 after its chief executive Michael O’Leary warned that a hard Brexit could ground UK flights for up to three weeks, and sector followers also digested a profit warning from Flybe.

The FTSE 100 erased early gains in London to end the day down 0.1 per cent, with BP and Shell the biggest drags. Oil prices fell below $70 for the first time in a month after a large increase in US stockpiles.

As results rolled in, investors took earnings misses very badly, causing sharp drops in some stocks and collateral damage to the travel, housebuilding and autos sectors.

EasyJet suffered the biggest fall on the FTSE 100, down 5.1 per cent amid a broader selloff in airlines.

A weak update from mid-cap housebuilder Crest Nicholson sent the shares down 8.2 per cent. That also weighed on the shares of peers Persimmon, Taylor Wimpey, and Berkeley Group.

Shares in catering firm Compass Group fell 3.5 per cent after Morgan Stanley analysts cut their earnings estimates and price targets ahead of its results.

“We are increasingly concerned about signs of rising competition ... and some structural threats such as digital disruption and evolving working practices,” MS analysts wrote.

Among rare gainers, education publisher Pearson rose 2 per cent after it stuck to its target of returning to profit this year.

Auto stocks went into reverse on news that European car sales fell in September and as Goldman Sachs warned that a slowdown in demand in China could dent earnings in the sector.

German healthcare group Fresenius Medical Care slumped 16.4 per cent after it lowered its financial targets for 2018 after reporting an 8 per cent fall in third-quarter net income.

Dutch paints and coatings maker Akzo Nobel jumped 2.4 per cent after it said its core profits rose by 8 per cent, despite the impact of raw material inflation.

US shares were lower in mid-afternoon trading in all-round choppy session on Wednesday, struggling to sustain a rally from the previous session, as IBM’s shares slid after the group reported a bigger-than-expected drop in quarterly sales.

Helping temper losses was a rise in Netflix on strong subscriber numbers and a gain in financial stocks ahead of the release of the minutes of the Federal Reserve’s September policy meeting.

Home Depot Lowe’s Cos fell after Credit Suisse downgraded the two home improvement retailers due, in part, to a dampening sentiment in the housing market – a weak spot in a robust economy.

United Airlines shares climbed after a solid third-quarter profit and again raising it 2018 outlook. That also lifted other airline stocks.