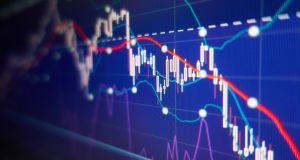 A sell-off in global equities resumed in Asia and US and European futures slid as Chinese shares snapped a two-day rally. The dollar traded around the highest level in two months and Treasury yields fell.

Asian stocks were teetering on the verge of a bear market with the MSCI Asia Pacific Index revisiting the lowest level since May 2017. Among the steepest decreases were in Japan, Hong Kong and China, where shares had had the biggest jump in more than two years Monday. Global equities as measured by the MSCI World Index face their worst month since August 2015. S&P 500 Index futures declined 1 perc ent and Euro Stoxx 50 contracts opened more than 1 per cent lower, indicating the rout will spread to US and European markets. The yen gained and gold ticked higher.

Risks still abound across global markets, from the continuing US-China trade showdown and tension surrounding the killing of a Saudi journalist to Italian budget fears and President Donald Trump’s unpredictable actions ahead of American midterm elections. Equities are looking for direction after a miserable few weeks, and company results from the likes of Amazon, Alphabet, Microsoft and Intel as well as US growth data may provide a stimulus in the coming days.

“Global financial markets continue to struggle to rally as various geopolitical concerns weigh on investor confidence,” Nick Twidale, chief operating officer at Rakuten Securities Australia, said in a note. With the rest of the world looking much more pessimistic in the current environment, markets were poised for a firm correction, he added.

Equities failed to get any reprieve after China announced fresh measures to ease the funding strains of private companies, as top officials seek to restore confidence in the world’s second-largest economy. The State Council announced it would support bond financing by private firms, and said the central bank will provide funding to facilitate this.

Despite the government support, concerns about bond defaults among Chinese private companies are rattling investors’ confidence, according to Samuel Siew, an analyst at Phillip Futures Pte in Singapore. ‘

“The possibility of a full-blown trade war with the U.S. is still high, and should the U.S. eventually implement another wave of tariffs on China, China’s economic growth would inevitably slow down despite additional stimulus from the Chinese government,” Siew said.

Elsewhere, oil traded near the lowest in almost five weeks. The pound maintained a retreat as the UK blurred more red lines in its Brexit negotiations, heightening the danger to Prime Minister Theresa May. – Bloomberg

1 Covid-19 crisis shows drastic economic policy changes possible – Piketty
2 Coronavirus: EU must act quickly to save its shared economy
3 Medtronic aiming to make 1,000 ventilators a week in Galway by June
4 Learning from companies that thrived after the Great Depression
5 Chopra warns coronavirus will have ‘deeper’ impact than financial crisis
6 Coronavirus: Berlin ready to aid EU economy, says Merkel
7 Major building projects could be delayed two years after Covid crisis
8 Rivian takes on Tesla with big batteries and subtler approach
9 What does the ECB’s doing ‘everything necessary’ policy mean for you?
10 Remote working doesn’t suit everyone, and it exposes woolly leadership
Real news has value SUBSCRIBE