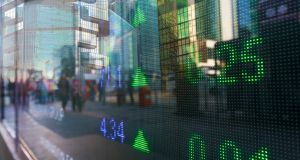 MSCI’s broadest index of Asia-Pacific shares outside Japan was last up 0.2 per cent following a decline of more than 2 per cent in the previous session.

Global stocks had suffered this week on worries about US earnings, Italian government finances, U.S. trade tensions and mounting pressure on Saudi Arabia over the death of dissident journalist Jamal Khashoggi.

Hong Kong’s Hang Seng gained 0.25 per cent while the volatile Shanghai Composite Index was last up 1 per cent, supported by fresh signs of government support.

South Korea’s KOSPI was 0.3 per cent lower and Japan’s Nikkei added 0.5 per cent.

Wall Street’s three major indexes slumped early on Tuesday but ended well off the day’s lows as investors snapped up beaten-down shares late in the session.

“We may see more bouts of ‘mini panic’ until the U.S. midterm elections, but the bottom line is that the US economy is in good shape and that should prevent sentiment from breaking down.”

The dollar rebounded modestly against the safe-haven yen as risk aversion ebbed, rising 0.1 per cent to 112.565 yen after falling below 112.00 overnight.

The U.S. currency was given a lift as the 10-year Treasury note yield rebounded to 3.162 per cent after stooping to a three-week low of 3.111 on Tuesday.

The Canadian dollar took in stride the sharp decline in oil and stood firm against its US counterpart as investors maintained bets that the Bank of Canada (BoC) will hike interest rates later on Wednesday.

The Canadian dollar stood little changed at C$1.3081 per dollar after gaining 0.1 per cent the previous day.

“We do not believe that the declines in the markets so far are enough to dissuade either the Fed or the BoC from continuing to hike interest rates, as soon as today in the case of the BoC,” wrote Carl Weinberg, chief international economist at High Frequency Economics.

“However, markets will start to rethink the need for tighter policy if global equity markets go off the rails.”

China’s yuan added to the previous day’s modest gains and rose to 6.9367 per dollar in onshore trade, continuing its modest pull-back from a near two-year low of 6.9445 marked on Monday.

Sterling briefly gained half a percent against the dollar on Tuesday after a media report that the European Union could offer British Prime Minister Theresa May a UK-wide customs union to clinch a Brexit deal.

The pound’s strength was fleeting, however, a sign the market remains unconvinced May can successfully sell any deal to her Conservative party colleagues and get it through parliament.

The dollar index against a basket of six major currencies was flat at 96.961 after posting a modest loss the previous day.

Brent crude futures were up 0.4 per cent at $76.74 per barrel after sliding more than 4 percent the previous session to $75.88, their lowest since September 7th.

Crude slumped after Saudi Arabia said it could supply more crude quickly if needed, easing concerns ahead of US sanctions on Iran.

1 How I managed to cut my mobile phone bill by at least a half
2 Ireland must beware as digital tax reform enters critical phase
3 Fiona Reddan: Who’s afraid of Revolut? Not AIB and BOI it seems
4 Son putting elderly dad under pressure to sign over land
5 Lahinch Golf Club runs out of its own cash after €3m Covid-19 hit
6 State may face €1 billion in compensation in Covid-19 case, Press Up group claims
7 Is Coveney the right man to lead Greencore out of the Covid-19 crisis?
8 Reopening businesses can claim ‘restart week’ payment
9 Workhuman predicts double-digit growth for 2020 as revenues soar
10 Smarter ways to heat your home: Eight of the best modern systems
Real news has value SUBSCRIBE