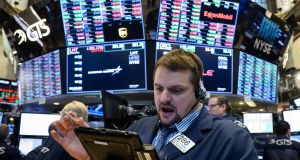 Traders work on the floor of the New York Stock Exchange, on Thursday. Wall Street fell for the fourth straight session, weighed down by financial and technology stocks. Photograph: Brendan McDermid/Reuters

A gauge of global stock markets slumped on Thursday while the dollar rose, as the European Central Bank (ECB) postponed interest rate rises to 2020 and launched a fresh round of cheap loans to banks to help rejuvenate the euro-zone economy.

Equities had drifted lower over the past several sessions before the session’s sharp drop, sparked by the ECB’s change of direction just months after it wound down its massive quantitative easing programme.

The ECB’s move puts it in sync with other central banks around the world that have been taking a dovish tack, including the Bank of Canada earlier this week. The ECB also cut its growth and inflation estimates for 2019 as well as those for 2020 and 2021, raising alarm bells for investors once again over global growth. “We have had weakness the past couple of days but certainly, today’s action is being driven all by [ECB president Mario] Draghi because that was unexpected,” said Ken Polcari, managing principal at Butcher Joseph Asset Management in New York.

Builder Cairn Homes saw its shares fall 3 per cent to €1.29 despite saying revenues rose by 125 per cent to €337 million last year. The firm said it hopes to begin construction on the high-profile site it bought from State broadcaster RTÉ for €107 million within a year. Iseq heavyweight Ryanair also fell 1.5 per cent to €12.53 in tandem with other airline stocks across Europe.

London’s blue-chip index was in the red on Thursday, weighed by disappointing results and a number of stocks going ex-dividend. The FTSE 100 closed 38.45 points, or 0.53 per cent, lower at 7,157. There was a sell-off in mining and financial stocks as Rio Tinto, BHP Group, Evraz and Persimmon went ex-dividend – when buyers of the stock are not entitled to the recently declared dividend payment – while asset manager Schroders posted lower annual profits and insurer Aviva provided a grim outlook.

Aviva was the latest firm to flag pressure from Brexit uncertainties as it warned over “more muted” growth in 2019. Shares closed down by 14.3p to 419p after the group said it would be “difficult to sustain” earnings growth notched up over the past two years in the face of Brexit woes.

Rival insurer Admiral, however, enjoyed record full-year profits and handed bonuses worth £3,600 to thousands of staff. A total of 10,000 employees were handed the share award under a bonus scheme linked to Admiral’s performance. But shares in Admiral still fell by 103p to 2,088p. In other corporate news, sales at Greggs topped £1 billion for the first time as the launch of its controversial vegan sausage roll helped drive a surge in customer numbers. The bakery chain posted a 15 per cent rise in pre-tax profits to £82.6 million in 2018, with sales rising 7.2 per cent to just over £1 billion.

Stocks in Europe were whipsawed, first jumping but then quickly reversing course when the ECB acknowledged that Europe’s slowdown was longer and deeper than earlier thought. The pan-European Stoxx 600 index lost 0.55 per cent. Car stocks and basic resources both shed more than 2 per cent. However, JC Decaux was up 1.2 per cent after the company reported a net profit increase in 2018 and decided to pay a higher dividend.

Wall Street fell for the fourth straight session on Thursday, weighed down by financial and technology stocks, as investors were spooked by the ECB’s return to pump-priming loans to stimulate a struggling euro zone economy.

The ECB also pushed out its first post-crisis rate hike to at least next year, adding to a cocktail of concerns over trade tensions, Brexit uncertainty and global growth risks, which have weighed on markets over the past year.

Bank of America, JPMorgan Chase, Morgan Stanley, Citigroup fell between 1.2 per cent and 1.6 per cent. Also pushing markets lower were technology companies, which slipped 0.75 per cent, hurt by a fall in marquee names including Apple and Microsoft.