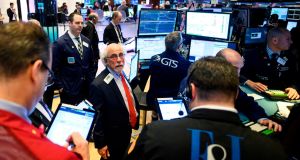 Stock indexes around the world were higher on Monday on optimism the US and China would reach a trade agreement as soon as this month.

In Dublin, the Irish index of shares ended the day 70 points higher at 5838.10, lifted by gains in banks and some of the heavyweight stocks.

Smurfit Kappa saw its share price gain 2.85 per cent to €26, with traders saying the stock was following the market.

Shares in Irish energy company Greencoat Renewables fell almost 1 per cent over the day to end the session at €1.08. Earlier the company had reported a sharp rise in both income and profits in its first set of full-year results as a listed company.

House builder Cairn Homes fell 2 per cent over the day to end at €1.31, with traders seeing little cause for the decline.

London’s top index strengthened on Monday on investor confidence that the US was close to agreeing a new trade deal with China, which could be penned this month. The FTSE 100 closed 27.66 points, or 0.39 per cent, higher at 7,134.39.

“Stocks are largely higher... due to the report that China and the US are close to reaching a trade deal. Sentiment has been improving for a number of weeks now, and the latest report said that both sides are considering reducing or even removing tariffs on each other’s goods,” said David Madden, market analyst at CMC Markets. “The trade standoff between the two largest economies in the world has weighed on sentiment in recent months, and now it might be near its end.”

In corporate news, Ray Kelvin resigned as chief executive of Ted Baker with immediate effect following harassment allegations. Mr Kelvin, who also founded the retailer, was forced to take a leave of absence last year amid claims that he enforced a “hugging” culture at the company and that he massaged employees, kissed their ears and asked some to sit on his lap. Mr Kelvin denies all allegations of misconduct. Ted Baker shares closed 90p higher at 1,982p.

Insurance giant Aviva appointed Maurice Tulloch, the head of its international arm, as its new chief executive. He will replace Mark Wilson, who is standing down after more than five years at the helm. Aviva shares grew by 2.5p to 434.5p.

The pan-regional Stoxx 600 index rose as much as 0.6 per cent during the session to its highest level since October 5th, before paring some gains and ending up 0.2 per cent on the day. US president Donald Trump and Chinese president Xi Jinping could reach a formal trade deal at a summit around March 27th given progress in talks between the two countries, the Wall Street Journal reported on Sunday.

US shares reversed early gains and headed lower as investors awaited details of a possible trade deal between the White House and China.

The S&P 500 Index’s advance petered out after the gauge approached a five-month high at the open, dragged lower by health and tech companies.

Yet signs of progress between Beijing and Washington failed to provide much support to US stocks after this year’s rally in global equities showed signs of stalling last week.

Investors focused on the outlook for global growth got a boost when China was said to plan a 3 percentage-point cut to its VAT tax rate for manufacturing to support its economy, which Morgan Stanley estimated could add 0.6 per cent to growth.

Investors will get the latest read on the US economy with the monthly jobs report on Friday.