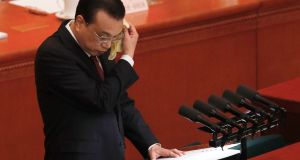 The Iseq outperformed European peers on Tuesday while economic data from China put a dampener on global markets as a trade deal with the US remains to be thrashed out.

Corporate earnings results drove most of the moves in the Iseq which closed up 0.34 per cent on the day.

Following a relatively poor week for banks last week, the financial sector showed some signs of recovery on the day. Bank of Ireland, the largest of the Republic’s listed banks, edged up 1.21 per cent to €5.86 while AIB was flat at €4.15.

Housebuilders put in a strong performance on the day with results for both the sector’s listed entities coming later in the week. Glenveagh Properties closed up 0.12 per cent to €0.85 ahead of results on Wednesday while Cairn Homes advanced 0.92 per cent to €1.32. Cairn will report earnings on Thursday.

Paddy Power, which will also publish results on Wednesday, finished the day 1.4 per cent higher at €72.30 after its peer, Ladbrokes owner GVC, jumped more than 7 per cent higher on a solid set of results.

The FTSE 100 was lifted by the weaker pound on Tuesday following reports that the Government doubts that there will be a breakthrough in Brexit talks between attorney general Geoffrey Cox and the European Union’s chief negotiator Michel Barnier.

Shares in Debenhams tumbled after the troubled retailer warned over profits as sales continue to come under pressure, with the company also locked in restructuring talks with its lenders. Debenhams shares fell 0.09p to 3.10p.

The pan-European STOXX 600 closed up 0.2 per cent after trading in the red for part of the day, extending a three-day rally into four straight days of gains.

Autos and suppliers were the worst performers, losing 0.5 per cent.

It was also a bad day for European banks which lost 0.4 per cent, with shares in Austria’s Raiffeisen Bank International (RBI) falling more than 12 per cent. The share price falls followed a report by a collective of European news outlets which was based on what it said were leaked documents detailing transactions worth more than $470 billion sent in 1.3 million transfers from 233,000 companies.

Among individual movers, Eurofins fell close to 10 per cent after the food and biopharma product testing firm said it would curb its M&A activity in a bid to shore up margins and cash flow.

The S&P 500, which closed last week above the significant 2,800-point mark for the first time since November 8th, failed to hold on to that level on Monday despite a solid start on the back of a report that a trade deal could happen as early as March end.

The Dow Jones Industrial Average and the S&P 500 posted their biggest drop in nearly a month in the previous session. The S&P 500 has climbed about 11 per cent in 2019 and is now about 5 per cent away from its September 20th record closing high, helped by a dovish stance from the Federal Reserve and on hopes the United States and China would soon hammer out a trade solution.

Target jumped 5.1 per cent, while Kohl’s gained 5.8 per cent after the retailers forecast annual earnings above estimates. Their upbeat results along with Amazon. com’s 0.33 per cent rise pushed the consumer discretionary 0.49 per cent higher.