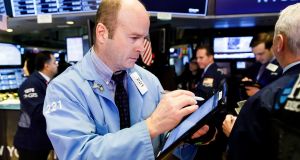 Traders on the floor of the New York Stock Exchange as stocks were down and investors awaited news on trade talks between the US and China. Photograph: Justin Lane/EPA

Brexit-sensitive Irish stocks such as ferries operator Irish Continental Group and drinks company C&C led a broad advance on the Dublin market on Tuesday as investors grew more confident that the UK would avoid crashing out of the European Union next month without a deal.

While fading optimism about US-China trade talks weighed on the wider European market at the start of the session, the pan-European Stoxx 600 managed to close 0.5 per cent higher.

Dalata Hotel Group was also in demand, gaining 4.3 per cent to €6.10, after the company reported that its pre-tax profit grew 13 per cent last year to €87.3 million, exceeding analysts’ expectations.

Property group Green Reit moved 1.9 per cent higher to €1.48, after it reported that its rental income rose by 2 per cent in the six months to the end of December.

Britain’s FTSE 100 fell on Tuesday as miner Fresnillo slumped after poor results and the sterling rallied on growing signs of a Brexit delay, if not a soft Brexit being executed by the end of March, though online grocer Ocado soared after confirming joint venture talks with Marks & Spencer.

The FTSE 100 ended 0.5 per cent lower after steep losses in the morning as the index’s stocks, which book much of their earnings in dollars, were marred by the pound surging to four-month highs.

Sterling gained on reports that British prime minister Theresa May would rule out a no-deal Brexit and delay the March 29th deadline for exit from the EU. Some EU officials said the union would be ready to approve a short Brexit delay should Britain need more time to ensure parliamentary ratification of their divorce agreement.

Ocado shares surged 12 per cent on the main index after confirming talks with Marks & Spencer to form a joint venture. M&S shares added 3.2 per cent while Ocado marked its best day since last May, when it announced a deal with Kroger.

Precious metals miner Fresnillo slipped 8.3 per cent as 2018 pretax profit slumped by more than a third and it flagged an “unwelcome degree of uncertainty” from the China-US trade dispute.

British Airways owner IAG dipped 4.3 per cent after index provider MSCI said it plans to delete the stock from its Spanish index.

In Germany, BASF rose 2.3 per cent after the German chemicals giant delivered slightly better-than-expected profits, even though they plunged nearly 60 per cent due to weak results at its petrochemicals unit.

The S&P 500 was little changed as of lunchtime in New York, with gains capped at the round-number milestone of 2,800, as Federal Reserve chairman Jerome Powell discussed the path for monetary policy and the health of the economy before Congress.

The Dow Jones Industrial Average was also flat, while the Nasdaq dipped 0.1 per cent.

Mr Powell said a healthy economy has faced some “crosscurrents and conflicting signals” that officials in January decided warranted taking a patient approach to rate changes.

With inflation pressures “muted”, the Fed in its decision last month to keep rates unchanged “determined that the cumulative effects’’ of its actions and global and financial developments, “along with ongoing government policy uncertainty, warranted taking a patient approach with regard to future policy changes,’’ he said.

Among other drags was Caterpillar, which fell after brokerage UBS double downgraded the stock.

1 Why gift a son now if it eats into his tax-free inheritance threshold?
2 Mortgage arrears: Prevention is definitely better than cure
3 Dublin council puts Unicorn restaurant demolition plan on hold
4 Can we finally say farewell to the scourge of hot-desking?
5 Flights abroad ban could last all summer
6 Deloitte was top Irish dealmaker in first half of this year
7 Ballymore acquires London shopping centre for €83m
8 Government to avoid ‘cliff-edge’ on Covid-19 payment changes
9 Chris Johns: Economic self-harm is the root of populism
10 All parties to High Court hearings told to wear facemasks
Real news has value SUBSCRIBE