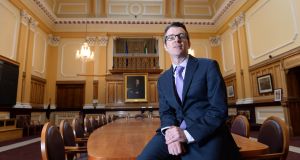 ISE chief executive Daryl Byrne: “I think the second half of the year is more likely when we could see companies coming to the market.” Photograph: Dara Mac Donaill

Daryl Byrne, the Irish Stock Exchange’s (ISE) chief executive of five months, has been clocking up the air miles of late.

Less than a year after the Dublin exchange abandoned its independence to join pan-European exchange operator Euronext, Byrne has found himself as part of a team that’s love-bombing the group’s latest target: Oslo Bors.

“Since the beginning of the year I’ve been up there [in Norway] five times,” says Byrne (47). “My involvement is really around outlining the benefits that Euronext can bring to a local, independent exchange, and what it can offer in terms of supporting the growth of that exchange in a local market and within an integrated group as well.”

While Euronext already owns 5.3 per cent of the Norwegian bourse and has mopped up enough shareholder commitments to take it over the 50 per cent mark after raising its bid early last month, Landsnes and her board are backing rival bidder, Nasdaq, saying the New York group is a “better fit” for one of the few remaining standalone exchanges in Europe.

Byrne’s predecessor, Deirdre Somers, was something of a late convert to the attractions of Euronext, having spent much of her 11-year tenure resisting a wave of consolidation in the industry – and arguing that the Franco-Dutch group, in particular, had “destroyed” the financial “ecosystems” in other European cities.

Somers changed her tune by the time a deal was announced in November 2017, saying her “words in the past” reflected a different Euronext, which had been under the de facto ownership of the New York Stock Exchange (NYSE) between 2007 and 2013, before managing to break free in its own 2014 flotation.

The spectre of Brexit was the tipping factor for the ISE to seek a partner two years ago, according to Byrne. But there were other considerations. The exchange’s owners, a group of Dublin stockbrokers – who had shared in a €27.5 million pot of excess cash as the ISE’s structure was reorganised in 2014 – were keen to get hold of additional money from an outright sale.

The third driver of the deal was the fact the exchange was looking to take its global leading debt and funding listings markets – which were generating most of the group’s income – to the next level.

“To develop the debt and fund listings business further would have required significant investment,” says Byrne in an interview with The Irish Times in the exchange’s storied former trading room, where shares last changed hands in June 2000 before the system went electronic.

“To do that in a transformative way probably involves some kind of M&A [mergers and acquisitions] activity.”

Euronext, established at the turn of the century through the merger of the Paris, Brussels and Amsterdam exchanges and joined two years later by the Lisbon bourse, has the kind of balance sheet that’s needed.

“As part of looking at how we can grow our business, we’re looking at other types of companies that are out there that might be complementary,” says Byrne, declining to give further details, other than to say that potential targets would be overseas.

The ISE’s sale at the end of last March delivered a €158.8 million payday for Davy, Goodbody Stockbrokers, Investec, Cantor Fitzgerald and Campbell O’Connor. Cash windfalls and top executive bonuses tied to the deal boosted Somers’ 2017 remuneration to €5.75 million. She left the company last September, saying she’d “decided to begin the next chapter of my business career”.

Windfall Byrne, an accountant by background who

joined the ISE in 2000, wasn’t among the lucky windfall recipients.

Euronext’s annual results, published on February 14th, showed that Euronext Dublin, as the ISE has been rebranded, contributed almost €25 million of revenue in its first nine months as part of the Amsterdam-headquartered group. The business’s registered name remains the Irish Stock Exchange.

Euronext Dublin’s move last month onto the group’s trading system, Optiq, is potentially transformative. It has opened the Dublin equities market to more European investors as the number of member firms trading Irish shares rose automatically from 21 to 30.

“We should see more trading in Irish companies’ securities over time,” says Byrne. Standing on its own in a hard-Brexit scenario, the exchange might have seen the opposite trend.

In the six years before Euronext showed up, a number of Irish companies – including CRH, DCC, Smurfit Kappa, Greencore and UDG Healthcare – either moved their main listing to London or quit the ISE entirely to access a deeper pool of investors.

“There are now a number of UK companies that, as part of the Brexit planning, have been looking at taking an additional listing in a European venue and Dublin is one of them,” according to Byrne.

So far, only one – London-listed software firm Scisys – has taken the plunge. But Byrne estimates that up to 10 others are seriously considering dual listing in Dublin to maintain access to European investors in the event of a disorderly Brexit.

Aside from being chief executive of Euronext Dublin, Byrne is the head of the wider group’s debt and fund listings and exchange-traded funds (ETFs) business and is a member of its managing board.

He says that the Irish business is likely to move this year from just being a place where companies globally have a technical listing of bonds to becoming an exchange where notes are actually traded. In contrast to global equities markets, most bonds are not traded on exchanges, or what’s known in the business as the “secondary market”, but over the counter between large buyers and sellers.

Euronext Dublin, as the group’s “centre of excellence” for the burgeoning world of ETFs, which hold a collection of assets such as shares, commodities or bonds, is also poised to launch a one-stop shop this year for the trading of ETFs listed on any regulated exchange in Europe. Traditionally Dublin-listed ETFs have been traded in London.

Byrne’s promotion to head up the Irish business saw him inherit the group’s plan to extract €8 million of cost savings from the ISE deal by the end of the decade.

The company, which had grown from about 30 people when he joined almost 18 years ago to a peak of about 125, initiated a redundancy programme last October to cut about 20 jobs, or 16 per cent of its workforce.

These are mainly roles in finance, information technology (IT) and other areas that overlap with Euronext.

Byrne is something of a lifer at this stage. After qualifying as a chartered accountant with EY, then Ernst & Young, in 1998, the Dalkey native worked in Boston for two years in internal audit and compliance with insurance and financial services group New England Financial.

At the exchange, Byrne has held a number of senior positions over the past two decades, including head of regulation between 2011 and 2018.

Byrne has spent most of his time with the exchange commuting by train from Co Laois, where he lives with his family in the village of Killenard, some 75km southwest of Dublin. Overseas travel commitments that have come with the new role may prompt a move back to Dublin later this year, he says.

While Somers was a prominent – and assertive – presence in Irish corporate life when in charge of the exchange, and her predecessor, the late Tom Healy, was a legendary character, Byrne is more understated.

How does he describe his own management style? “I like having a clear vision of where we’re going as a team. For the people working for me, they get a lot of autonomy, but I’m there to support them and mentor them as well. We’ve a very strong management team here.”

Colleagues are often surprised to learn that he’s a diehard heavy metal fan. He rattles off Metallica, Avenged Sevenfold and Linkin Park among his favourites.

“I try to get to as many concerts as I can. I saw Avenged Sevenfold in London one night and in Dublin the next night. I’m going to see Metallica in Paris in May and plan to work from our offices in the city the next day. I’ll catch them again when they’re in Slane in June.”

This summer will also see Euronext Dublin complete work on its new headquarters in the landmark old armoury building at Foster Place, College Green, in Dublin, which backs on to its existing premises. The exchange bought the building, which housed the Irish House of Lords until it was abolished by the Act of Union in 1800, in 2016. All in, the project is set to cost €14.5 million.

The old trading hall – still used for official ringing-of-the-bell photo opportunities for companies floating on the market and other corporate events – is also set for a minor makeover.

Californian private equity group Oaktree and Dublin-based Sigma Retail Partners decided in October to push out a decision on whether to proceed with a retail Reit flotation to this year.

Elsewhere, Paddy McKillen jnr’s fast-growing pub, restaurant and hotels group, Press-Up Entertainment, decided over the summer to mothball plans for a flotation and decided to fund its near-term growth ambitions from its own resources.

While markets have rallied in first two months of 2019, Byrne says flotation prospects are in a wait-and-see mode.

“I think the second half of the year is more likely when we could see companies coming to the market. We’ll have to see what happens with Brexit and general macro-economic conditions. There are good companies out there that would be good IPO candidates. The timing isn’t right at the moment. But we’re hopeful.”

He’s not the only one.