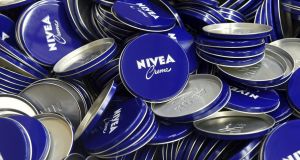 European shares ended a rally as a warning from Nivea skin-cream maker Beiersdorf took the glow off consumer stocks, prompting an outbreak of caution among investors.

Permanent TSB failed to impress investors after reporting that profit before tax and once-off charges rose 45 per cent last year to €94 million. Its shares closed 2.54 per cent down at €1.536 and hit a low of €1.52 early in the day, despite the fact that banks were generally in favour on Wednesday.

Bank of Ireland climbed 6.3 per cent to €5.48 while AIB added 2.07 per cent to close at €3.95. Dealers said that signs of some movement in the Brexit impasse aided the Irish lenders, which also benefitted from a generally strong performance in the sector across Europe.

Other stocks with a big exposure to the Republic’s economy also rallied on hopes of averting a crisis as the UK prepares to leave the EU next month. Builder Cairn Homes rose 4.44 per cent to €1.316.

The company’s shareholders this week voted for measures that would ultimately allow it return cash to investors through stock buy backs and other measures.

Rival Glenveagh put in a similar performance, advancing 4.58 per cent to 84.5 cent.

Insurer FBD added 1.58 per cent to €8.98 after announcing that it made €50 million profit before tax last year and delivered a 15 per cent return on equity.

Woodies DIY owner Grafton, which is listed on the London market, was 0.6 per cent off at 790 pence sterling as it prepared to report 2018 results on Thursday.

Department store chain Marks & Spencer (M&S) will buy 50 per cent of online player Ocado’s UK retail business for up to £750 million in a deal meant to “transform” grocery shopping.

M&S shares sank on the news that the struggling retailer will issue new shares in a bid to raise up to £600 million to finance the deal, as well as slash the dividend by 40per cent. The stock closed down 37.8p, or 12.5 per cent, at 265.4p.

The pan-European STOXX 600 index closed down 0.3 per cent on Wednesday.

Shares in Air France KLM suffered their worst day in more than a decade after the Dutch government said it would take a 14 per cent stake in the airline. The move highlighted tensions between the Netherlands and its French partners in the company. Air France shares tumbled 11.74 per cent to €11.24.

Nivea skin-cream maker Beiersdorf plunged to two-year lows after it issued a shock warning about its 2019 operating margins, with the company’s new chief executive declaring the consumer goods industry was in “turmoil”. Beiersdorf’s stock slid 9.81 per cent to €81.98 dragging down other consumers goods names Unilever, Henkel and Reckitt Benckiser.

Wall Street’s main indices extended losses on Wednesday after US trade representative Robert Lighthizer said the country’s issues with China were “too serious” to be resolved by promises of more purchases of US goods by Beijing.

Shares of Mylan sank 12.1 per cent after the generic drugmaker missed quarterly profit estimates and forecast weak 2019 earnings. Best Buy Co jumped 15.8 per cent after the consumer electronics retailer beat analysts’ estimates for quarterly same-store sales, while announcing a hike in dividend and a plan to buy back shares

The energy sector rose 1 percent on the back of higher oil prices. Exxon Mobil and Chevron led gains on the Dow, with a 1 per cent rise. – Additional reporting - Reuters

1 Policy failed us during the banking crisis and it’s failing us again
2 In praise of Gogglebox Ireland, an essential service in all but name
3 Aryzta to pursue asset sales as takeover talks fail
4 Budget 2021: fuel prices rise and high-emission cars hit
5 Google's incredible power is the result of decades of regulatory failure
6 What is the real purpose of the Christmas party?
7 Aerogen targets record €100m in revenues
8 ‘It’s fantastic living here – in the gateway to Asia’
9 Samsung patriarch Lee Kun-hee dies at 78
10 Steering parts shortage stalls BMW car production
Real news has value SUBSCRIBE