Buffett downbeat on Berkshire’s prospects for big deals this year 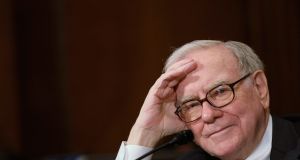 Warren Buffett’s Berkshire Hathaway will struggle to clinch a big acquisition this year, the doyen of the investing world lamented in his annual letter to shareholders at the weekend.

Mr Buffett, who transformed the textile manufacturer he purchased in the 1960s into a sprawling investment conglomerate that is now one of the world’s most valuable companies, warned on Saturday that the prospects for a big deal in 2019 “are not good”.

“Prices are sky-high for businesses possessing decent long-term prospects,” he wrote to shareholders in his wide-ranging and capricious annual letter. “[This year] will probably see us again expanding our holdings of marketable equities. We continue, nevertheless, to hope for an elephant-sized acquisition.”

Since then cash has built up on Berkshire’s balance sheet as its insurance and other businesses threw off profits and several contemplated multibillion-dollar takeovers collapsed. By the end of 2018, cash, primarily invested in short-term treasuries, reached almost $112 billion.

For much of last year Mr Buffett spent some of Berkshire’s cash on investments in publicly traded companies such as Apple and JPMorgan Chase, as it sat out a merger-and-acquisition frenzy that saw both private equity groups and companies snap up businesses. Berkshire repurchased some of its own stock, a relative rarity for the group.

But the almost $500 billion-valued company slowed new stock investments and its own share buybacks in the final three months of the year, a move that caught Wall Street analysts and investors by surprise. Morgan Stanley had expected Berkshire to buy back $2.5 billion of its own stock in the quarter, ahead of an anticipated $10 billion spree in 2019.

Instead the company repurchased $418 million of its shares in the period. That has raised questions over how Mr Buffett and his management team plan to spend its growing capital base.

“There will be limited opportunities for Mr Buffett [and] that puts more pressure on his investment team,” said James Shanahan, a senior analyst with Edward Jones, who characterised the level of share buybacks in the quarter as disappointing.

Mr Buffett’s sobering hunt for acquisitions comes as merger activity begins to slow from 2018’s heady pace, according to data provider Dealogic. Volatile market swings late last year have complicated M&A negotiations, with buyers and sellers often struggling to agree to a price on deals at the start of this year, bankers and lawyers said.

That may prove an added barrier to Berkshire as it seeks to secure a large acquisition. Mr Buffett is known to avoid auctions for companies, and has said he will only buy a business so long as it is valued at a “a sensible purchase price”.

The group’s avoidance of debt in its deals also leaves it at a disadvantage to competitors that have been willing to borrow heavily to push their bids for assets higher. In 2017 Berkshire was elbowed out of an $18.8 billion fight for Energy Future Holdings, the parent company of Texas utility group Oncor, by Sempra Energy.

Mr Buffett has sat out buyout frenzies before. He and vice-chairman Charlie Munger long refrained from investing in technology companies, a move that helped shelter Berkshire from the boom and bust of the dotcom bubble. – Copyright The Financial Times Limited 2019